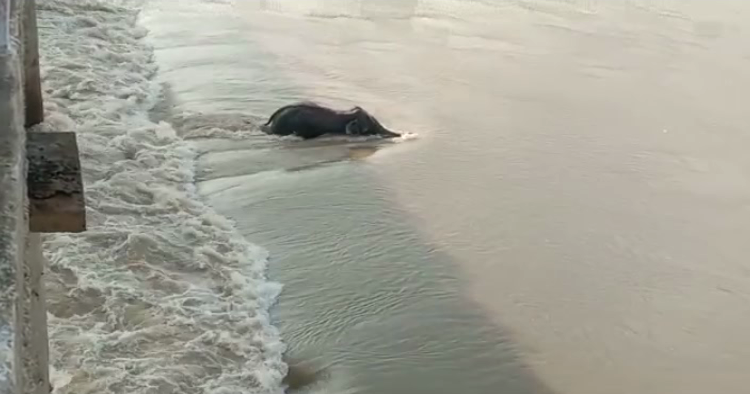 Cuttack: An elephant stuck at Mundali barrage in Mahanadi River for hours on Friday has reportedly died as a carcass of tusker was found near Jobra barrage here today.

The Forest Department is yet to ascertain whether the dead elephant is the same tusker that was stuck in Mundali.

A wild elephant after being separated from a herd was found stuck at Mundali barrage in Mahanadi River on September 24. The pachyderm was consistently struggling hard to come out of strong current of water. A power boat carrying six ODRAF personnel and two media persons was engaged in rescue operation of the animal.

However, the boat capsized in the whirlpool while the ODRAF members were trying to ward off wild elephant preventing it from any possible eventuality.

The rescue operation turned tragic as a young journalist – Arindam Das – and one ODRAF person – Sitaram Murmu – died in the mishap.

Following the incident, the elephant was thought to have been swept away in strong current of water. However, no confirmation was made about its death till yesterday.