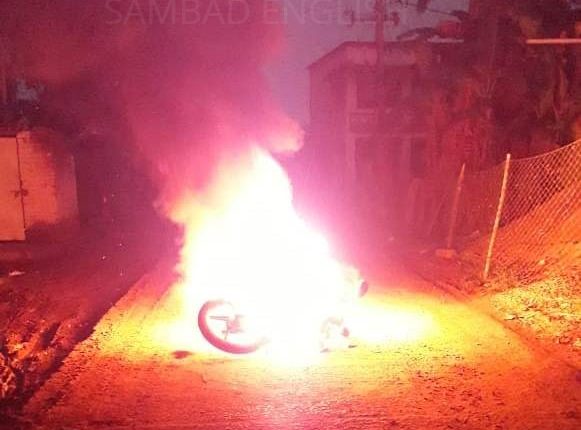 Bhadrak: A day after the Ganjam bus tragedy, two persons had a narrow escape today as the motorcycle on which they were travelling came in contact with an 11 KV wire near Koithakola under Chandbali block in Odisha’s Bhadrak district.

Though the two-wheeler caught fire, the duo fortunately escaped unhurt. According to reports, Duryodhan Roul (65) and Sudarsan Jena (32) of Guala village were heading towards Koithakola on the motorcycle early this morning around 4 am when the vehicle came in contact with the high voltage wire.

The two received electric shock and fell from the motorcycle. The vehicle soon caught fire and was gutted in the blaze.

Movement of vehicles on the road came to a grinding halt after the mishap. Normalcy returned after Sudarsan lodged a written complaint in this regard with Dhamra police, following which power supply was disconnected in the locality.