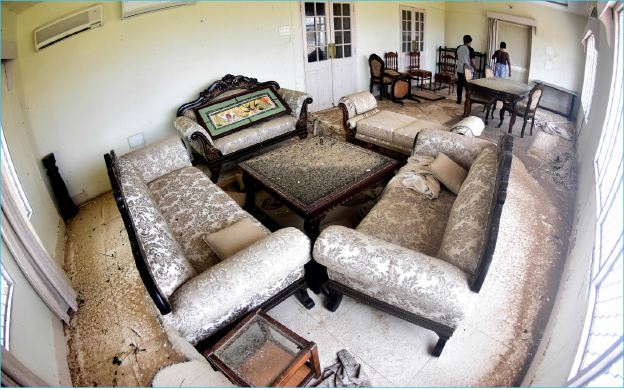 Puri: Even the extremely severe Cyclone FANI that had hit Odisha coast did not spare Raj Bhavan devastating entire building and its premises in the pilgrim town Puri.

According to reports, the living room of the Raj Bhavan where around eight Presidents of the country had spent nights has lost its charm. The high-cost furniture and other valuables were destroyed. The green cover and the garden filled in colourful flowers in the Raj Bhavan were stripped off.

The structure was filled in sea sand during the cyclone. The huge water tank with capacity of 4,000 litre water on the premises of Raj Bhavan was blown away due to the strong winds. The staff quarters were also affected by the tropical storm.

Notably, the Cyclone FANI devastated coastal Odisha after it made landfall at Krushnaprasad block on May 3 forenoon in Puri district. Millions of people are spending days and nights at shelter houses and under polythene sheets. As the major services such as power, water and telecommunication were badly affected, the residents in coastal towns including Puri, Bhubaneswar and Cuttack are struggling under scorching sun.