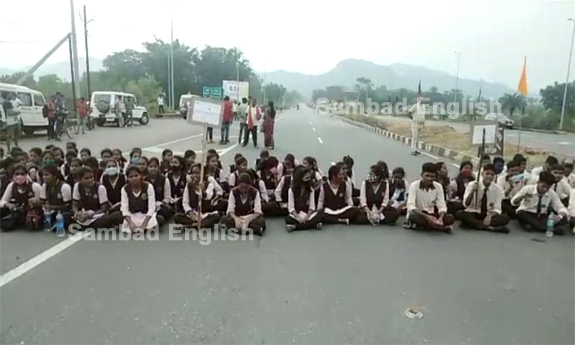 Kalabadia/Bangiriposi: After running from pillar to post over acute staff crunch and several other issues, hundreds of students from Ekalavya Vidyalaya at Shyamsundarpur panchayat under Bangiriposi block of Mayurbhanj walked a distance of about 7 Km to ventilate their grievances to the district Collector.

The students had to cover the distance in scorching heat of the Sun. They were detained midway by the police administration. As a result, the irked schoolchildren blocked NH-49, a source said.

Token protest of roadblock was still underway till filing of this report as they were not allowed to meet Mayurbhanj Collector Vineet Bhardwaj in person. Instead, they were stopped at Bangiriposi and local police tried to convince them by promising to arrange for a virtual meet with Bhardwaj.

However, the students became rigid and insisted for a physical meeting with the Collector.

According to the source, the Ekalavya Vidyalaya was established around five years ago. The school has as many as 380 pupils studying in Classes VI to IX, including Class XII. The students have been facing utter difficulties due to the acute shortage of teachers since the beginning days.

Most of the classroom roofs have run down and water seep through them during rainy season. The inmates of the residential school live in unhealthy surroundings and are not provided with adequate and hygienic food to eat. It has no lab facility for conducting practical by the students.

Meanwhile, along with a platoon of force, Bangiriposi SDPO and Sub-Inspector, Jharapokharia PS IIC, Baripada ITDA chief, district welfare officer (DWO) and several other senior officials were present at the agitation site and were negotiating with the schoolchildren till the evening.

At around 6 pm, an e-mail was sent from the district collectorate by assuring immediate appointment of at least six teachers in the school, verification of food quality for four days in a week, arrangement of lab practical at nearby Laxmikant College and repair of classrooms, an administrative official stated.

On the other hand, vehicular movement was disrupted on the national highway for long hours.

2 including female constable dead, 1 critical as motorcycle rams into truck