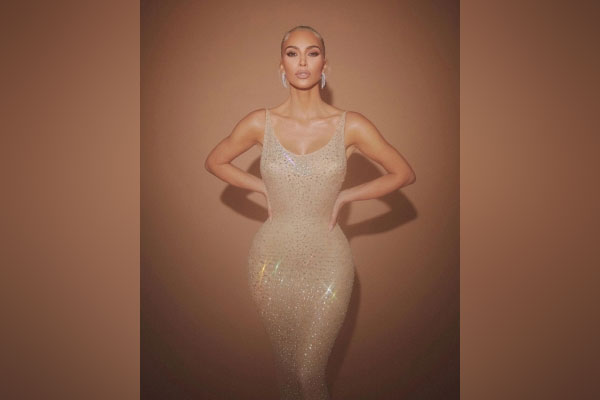 According to ‘Variety’, the sparkly sheer dress has been on display at Ripley’s Believe It or Not museum in Orlando. Since its purchase in 2016 for a whopping $4.81 million, a price that makes it one of the most expensive dresses ever sold. Kardashian’s visit to the museum April 23 with boyfriend Pete Davidson led fans to speculate that she could be wearing the dress on Monday.

Coupled with Kardashian’s previous comments about what she would wear to this year’s event, at which she has become a mainstay, the dress became a leading theory for what the reality star could choose to arrive in, reports ‘Variety’.

But it was confirmed to ‘Vogue’ on the night of the big ball. Kardashian arrived bleached blonde and sporting the historical frock.

On the ‘Vogue’ live stream, the reality TV star and business owner revealed that she had to lose 16 pounds in three weeks to fit into this look.

Kardashian has consistently made headlines with her outfits at the Vogue-hosted event, which draws eyes to the biggest stars in the world as they dress in theme at the behest of Vogue editor-in-chief Anna Wintour.

In 2019, for the gala’s “Camp: Notes on Fashion” theme, Kardashian wore a crystallised Mugler dress so tight she said she was given “corset breathing lessons.”

Last year, for the gala’s American fashion theme, Kardashian arrived in a head-to-toe black Balenciaga bodysuit that obscured her identity to the point of conspiracy, with onlookers claiming she had sent a stand-in to attend in her place.

As a follow-up to last year’s American fashion theme, this year’s dress code is “Gilded Glamour”.

Monroe’s Jean Louis dress certainly fits the bill, as it represents the historic actress and singer at her most spectacular.

Notably, the dress was so tight on Monroe that she had to be sewn into it before her performance at President John F. Kennedy’s 45th birthday event at Madison Square Garden, which may be the most iconic rendition of ‘Happy Birthday’ to ever be sung.

The dress originally cost $12,000. The chiffon fabric was made to perfectly match the singer’s skin tone, earning it the distinction of being a dress “that only Marilyn Monroe could wear.”