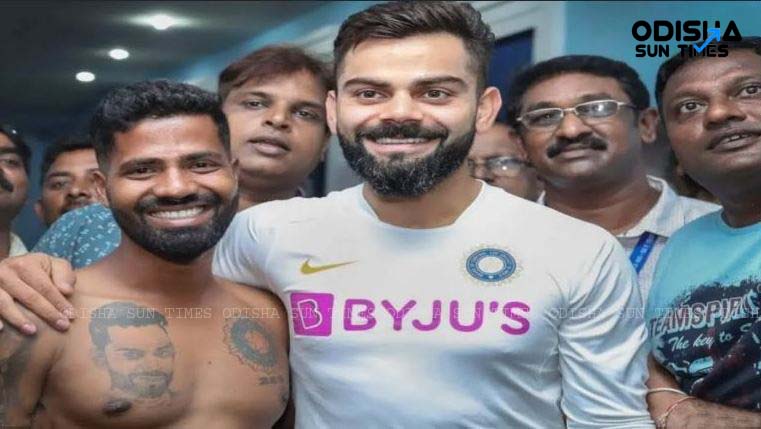 Visakhapatnam: Meet Pintu Behera from Odisha who is a die-hard fan of the Indian captain Virat Kohli.

Fans go to any extent to get their favourite star’s attention. True in this case too. The 31-year-old met his favourite cricketer on the eve of the test match at Vizag against the South Africa.

Interestingly, Pintu has got tattooed Virat Kohli’s first name, his jersey number (18) as well as landmarks in his career including the 2008 Under-19 World Cup win, 2013 Arjuna Award and the 2017 Padma Shri. He has as many as 14 tattoos on his body, giving a highlight of Kohli’s career so far.

“This is one of the precious moments in my life. I had been waiting for this moment for more than three years. I still can’t believe this,” Pintu, a building contractor by profession said.

The hardcore fan went topless and displayed the tattoos to Virat.

He hails from Masiakhali village under Kukudakhandi Tehsil in Ganjam district of Odisha.

The Indian captain is considered a run-scoring machine. He is regarded as one of the finest batsmen of the modern day cricket. He has over 26,000 international runs with 68 centuries across all the three formats of the game.