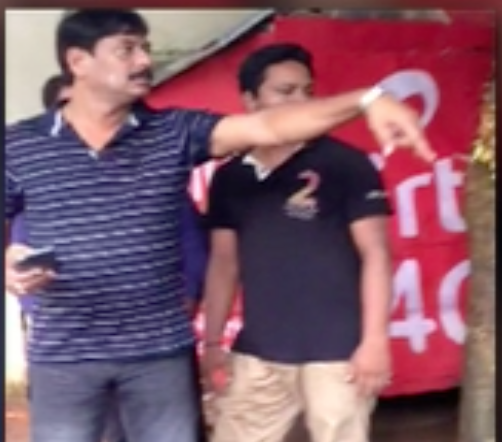 While none of the demonstrators identified themselves as workers of Biju Janata Dal, given an earlier warning issued by Biju Yuva Janata Dal, of which Sanjay Das Burma is the president, involvement of the party was evident. Interestingly, Biju Chhatra Janata Dal (BCJD) workers participated in it openly.

The agitators were seen shouting slogans against the MLA and demanding compensation to the eatery owners.

“What he has done is unacceptable. If the abuse and vulgar display of brute-power that day was not enough, he threatened us in front of the media today. He ransacked the makeshift hotels and now claims that he is continuing a Swachh Bharat Abhiyan. This cannot continue. We will continue our agitation,” said Smruti Samant Jagdev, who claimed that he shot the video displayed in TV channels last time.

The MLA, on the other hand, softened his stand today and attempted to play victim.

“Those were a bunch of antisocial elements who used to drink in that eatery and disrupt peace in the neighbourhood until late in the night. Moreover it is a government property. Besides, after the visual of our altercation was aired in the TV, they came back and were trying to rebuild their makeshift hotel. I called the cops and it was them, who brought it down and asked them to leave. I have nothing to do with it. All allegations against me are baseless,” said the MLA.

Questioned on his tendencies to take law into his hands, Jagadev retorted in a filmy tone, “This country has a history of leaders taking law into their hands during British rule and Emergency. I will also do so, if the situation demands. I have raised my voice against injustice since my childhood and will do that, no matter what”.

‘Tulasi Apa’ to be screened at Tehran film festival