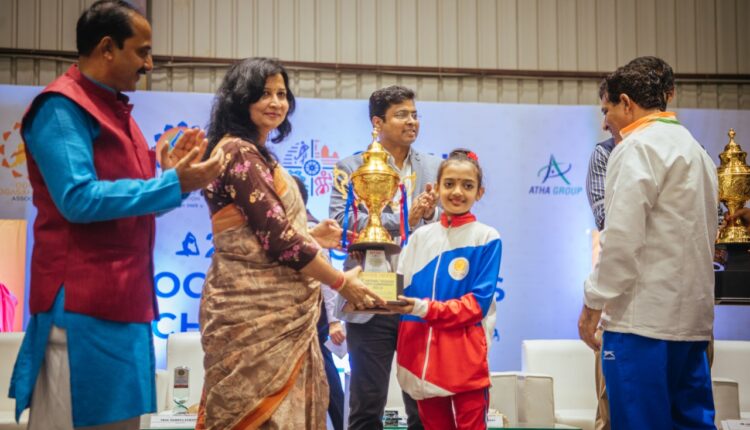 Bhubaneswar: “It is time for Yogasana as a sport to make a star entry into the Olympics,” said former National Hockey Team Captain and Padmashri Dilip Tirkey at the closing ceremony of the first-ever physical National Yogasana Sports Championships in Bhubaneswar.

Maharashtra was crowned as overall champion while Tamil Nadu bagged the second position and West Bengal and Goa emerged as third at India’s first ever Physical National Yogasana Championships hosted by Odisha.

Padmashri Dilip Tirkey, Chairman of the Odisha Hockey Promotion Council, praised the winners and young Indian athletes who participated in the championship and congratulated the National Yogasana Sports Federation (NYSF) for its success.

Addressing the gathering, Dilip Tirkey, said, “Yogasana is deeply embedded in the rich heritage and culture of Odisha. With this cultural legacy I am sure that the state will usher a new era of Yogasana sports and drive youth to engage successfully with this sport. Yogasana sports have the potential for becoming a landmark sport in the world and gain popularity and bring global recognition for India, like Hockey. After setting new milestones of success for the Indian Hockey and other Indian Sports, I am very confident that Odisha will become the global stage to nurture Yogasana as competitive sports.”

“I am happy, the National Yogasana Sports Federation is working tirelessly to support the country’s vision to make Yogasana a sport at Olympics,” he further added.

Over 560 bright, talented, and young athletes from 30 states competed in a uniquely designed competition organised by NYSF in association with the Government of Odisha.

Udit Sheth, President, NYSF said, “Odisha has been a gracious host for the first-ever physical National Yogasana Sports Championship. We are extremely thankful to the Government of Odisha for working with us and supporting the championship. Their support and work towards nurturing sports and athletes is a great service to our nation. At NYSF, we will continue to work dedicatedly to promote Yogasana sports throughout the country and advocate it on the international platforms as well. We will put in our best efforts to unleash the power of Yogasana Sports.”

Jaideep Arya, Secretary General, NYSF shared, “We are thankful to the young athletes, coaches and teams for their enthusiasm and love for Yogasana sport, because of them this championship has become a landmark event. We are gratified with the way the Government of Odisha has supported the championship and have been the most gracious host. Sports fraternity and the people of India have given us positive feedback and encouraged us to take Yogasana sports to higher levels.”