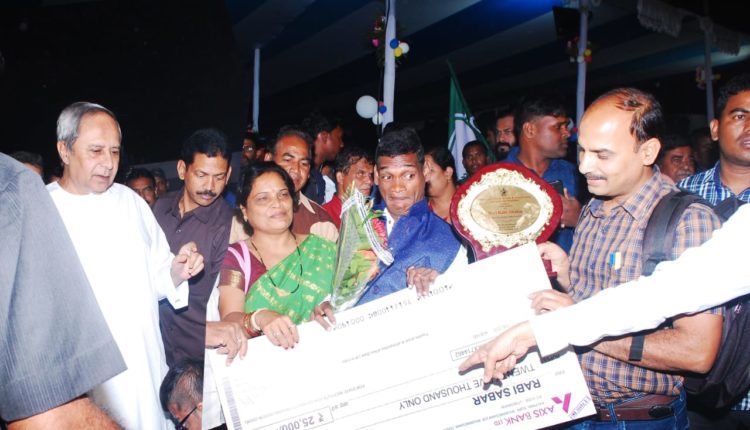 Nuapada: A mentally challenged youth set an example for many with his unique achievement and rigorous efforts to meet his mission of life.

Rabi Sabar, a resident of Maragada village under Sadar Block in Nuapada district, is mentally disabled person. However, the divyang youth has become an inspiration for others for his selfless service and noble cause for which he is surviving.

He was conferred with a state award by Chief Minister Naveen Patnaik on occasion of International Day of Persons with Disabilities for his dedicated service at a school. He received Rs 25,000 cheque as reward for achievement.

However, the reward prize is not only the acknowledgement to him, but also a big amount that the 26-year-old mentally challenged youth is saving for his sister’s marriage.

According to reports, Rabi’s father Lakshman Sabar is a mentally ill person and his mother Birabai Sabar is working outside the state as a bonded labourer for livelihood. After marriage of his two sisters, youngest sibling is his responsibility.

After diagnosed with cerebral palsy, a group of neurological disorders that appear in early childhood and permanently affect body movement, he was enrolled at Biju Patnaik Special School for Mentally Challenged (BPSSMC), Nuapada, in the year 2000 for studies. However, the mentally challenged youth has crossed all the barriers through his strong will power and secured a position for him in the society.

Now, he is no more dependant on anyone for his own work. Reports said that the youth can do vocational work perfectly without taking anyone’s help. Now, he has been serving the divyang inmates as the attendant at BPSSMC since 2016.

Acknowledging his dedication, the state government conferred an award on him at a programme held at Adivasi Ground on December 3. He was in top of the list of 8 divyang nominees out of 44 candidates for the award.

Born in a poor family, the childhood days of Rabi went through hardships. His family was devastated after marriage of two sisters. His father lost his mental stability and her mother migrated to other state for earning. After facing difficulties of life, the mentally challenged youth is earning money for his livelihood as well his youngest sister’s wedding.