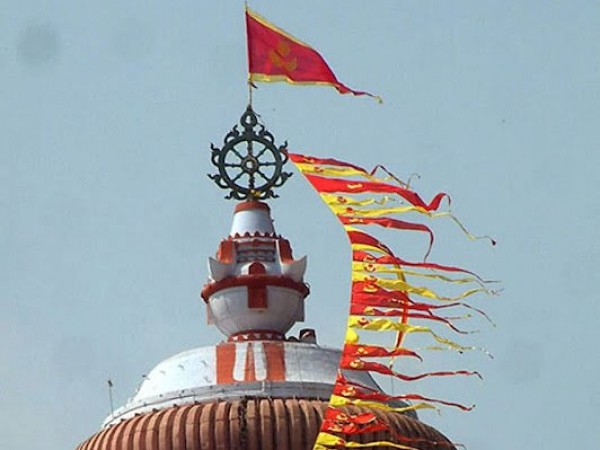 Puri: In a bid to promote the glory of Nilachakra placed at the top of Lord Jagannath temple, the monks and saints have decided to perform a special Aarti ritual of the metal or blue wheel, which is said to be Lord Bishnu’s most powerful weapon Sudarshan Chakra.

The Nilachakra Aarti will be conducted every evening from today, on the holy day of Ekadashi, on the top of Srimandir.

It is believed that a devotee gets virtue with darshan of Nilachakra atop the Jagannath temple during Aarti. The rituals of Nilachakra will be conducted by Shree Nilachakra Aradhana Seva Sansthan in the evening.

Puri Srimandir servitors to undergo COVID-19 test ahead of…

“Srikshetra is a land of wonder. The Nilachakra is the symbol of Lord Jagannath. According to Agni Purana, the Sudarshan Chakra of Lord Bishnu after being cursed for its ego, the lord blessed it to be worshipped along with deities on Ratna Singhasan on Lord Jagannath’s left side in form of a pole. He was also blessed to be placed atop Srimandir signifying the glory of Lord Jagannath,” said Ramcharan Das Maharaj, the convener of Nilachakra Aarti programme and former managing committee chairman of Srimandir.

During ‘Anasara’ period when deities suffer from fever and devotees could not see them on Ratna Singhasan inside the temple, they get satisfaction after having darshan of Nilachakra and Patitapabana bana, he said.

The most wonderful thing about Nilachakra is that it changes its colours throughout the day.

In the morning when the Sun rises, the colour of Nilachakra becomes red. With the increase of sunlight during the day time, it is slowly changed to blue colour. Among all the wonderful things about Jagannath temple, the shadow of Nilachakra is never visible and the Patitapabana bana flies opposite direction of the wind, Das Maharaj added.

Notably, the aarti is also being performed every evening at sea beach for Mahodadhi (sea). The Nilachakra aarti was added to the list of rituals performed in the Srimandir everyday.

Felt reduced to a vagina only: Swara on ‘Padmaavat’

Puri: Snana Jatra of deities to be held with…