No ‘Ghanta’ in temples as COVID-19 cases go up 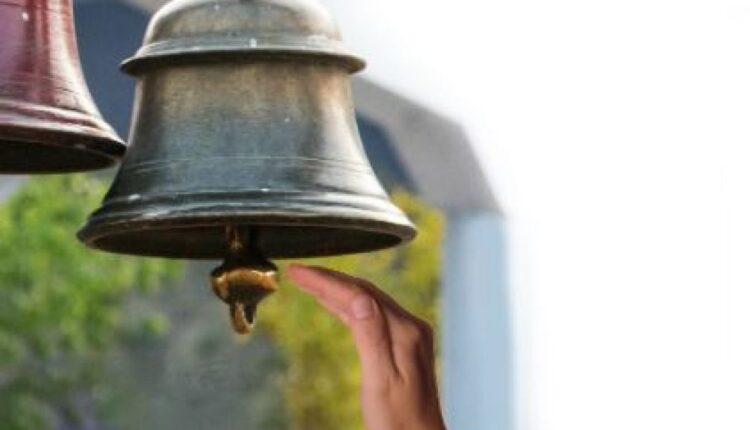 Lucknow:  Devotees will no longer be able to ring the bells at temples in Lucknow in view of the increasing cases of Covid positive patients.

Most temples in the state capital have tied a cloth over the bells to prevent people from touching them. Ringing bells known as ‘ghanta’ is a part of rituals during prayers in temples.

At the famous Hanuman Setu temple, the entry of devotees into the sanctum sanctorum has been stopped and only those who wear masks will be allowed to make offerings before the deity.

Chief priest Chandrakant Dwiwedi said that most of the priests have been sent home on leave in view of the Covid situation.

Ringing bells at the Mankameshwar temple has been banned and the entry of children below ten years and senior citizens has been prohibited.

The Mahakaleshwar temple in Rajendra Nagar in the state capital has stopped accepting offerings from devotees.

With Lucknow, reporting 935 new Covid cases till Thursday night, the state government has started taking strict measures to check the spread of the deadly virus.

The number of patients with active infections crossed the 3,900 mark for the first time in the city in nearly four months.

The number of new cases reported in other districts was 2,600.

Health officials said that high complacency in public behaviour that ushered in post-January and decline in herd immunity developed during the peak months of August and September is responsible for the surge.

The Lucknow district administration sealed a prominent city mall for allegedly violating the anti-Covid precautions issued under the Epidemic Act.

The district administration issued a notice to the Fun Republic Mall in the posh Gomti Nagar area, seeking its explanation for the violations, failing which the administration threatened to cancel its license.

The mall was earlier inspected by the district administration officials on March 23 when no visitor register was found there and people were also allowed to enter the mall without masks, prompting the administration to first issue a notice to it.

Six other commercial establishments, including a sweet shop, coffee shop, bar and cafe were also sealed for similar reasons.

District Magistrate Abhishek Prakash said that more such action would be taken if anyone was found violating the safety protocols.

Meanwhile, the district court and all other courts in Lucknow have been closed for three days after 13 judicial officials tested positive for Covid on Thursday.

All educational institutions in the state have been asked to conduct classes in the online mode and not to force any student to physically attend classes.