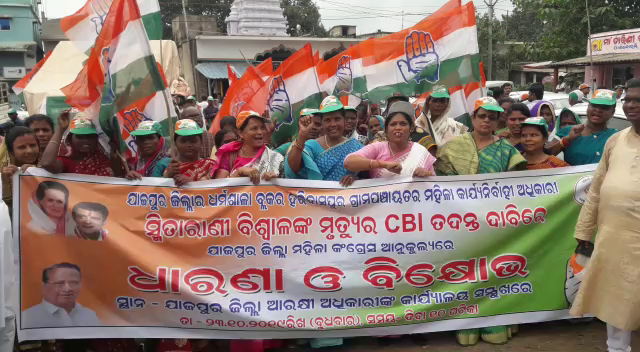 Jajpur:  Demanding a CBI probe into the death of Village Level Worker (VLW) Smitarani Biswal, who was found hanging in guest house on October 10, the women wing of Odisha Congress today staged a  protest in front of the SP Office at Panikoili today.

Hundreds of congress workers and senior leaders took out a protest rally from Panikoili Chhak to the SP Office and later gheraod the office. The activists alleged that pressurized by the state Government,  SP  Charan Singh Meena is not taking steps to nab the culprits involved in the alleged murder of the VLW. The Mahila Congress further demanded immediate transfer of the SP.

“We want justice to be served for Smitarani Biswal. We will intensify our protest and launch a statewide protest in coming days if our demands are not met at the earliest,” said State Mahila Congress Vice-President Bandita Parida.

Meanwhile, police personnel were deployed in the area to avoid any untoward incident during the protest.

On the other hand, the BJP state unit  targeted the state Government and the police alleging improper probe into the death of the VLW. At a presser, senior party leaders, including Sameer Mohanty, alleged that police are only looking into the personal aspects while neglecting the true facts in the investigation.

She was blackmailed to do unethical things, alleges deceased…