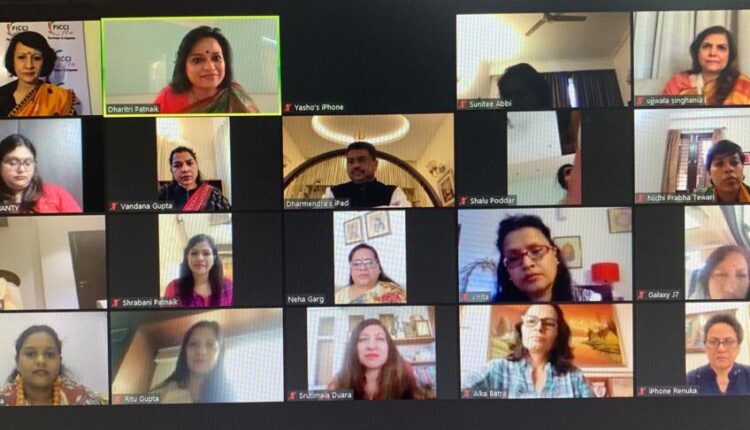 Bhubaneswar: Union Minister for Petroleum and Natural Gas and Steel, Dharmendra Pradhan today emphasised on the need to find out new mechanisms, new businesses and new ways of working and living to find solution for women who are facing issues while participating in the development of economy.

During a Webnair organised by FLO, the Women Wing of FICCI at 4 pm on ‘Atmanirbhar Bharat- Inclusive Growth for Transforming India’, Pradhan further said due to the improvement in technology, smart phones and Internet play a major role in the economy now. Due to technological advances there will be exponential growth in the economy, especially for women as the gender bias has no value here.

He added in the times of New Normal, bridging the digital divide can be achieved with internet and smart phones as the ultimate tool to enhance digital skilling and entrepreneurship amongst women from all sections of society

Pradhan proposed that women need to participate and promote organized discard and aggregation of used cooking oil from kitchens across the country, which could add a major boost in the government’s initiative of converting waste to fuel and promote healthy eating in Indian homes at the same time.

He informed due to the Ujjwala Scheme 15 lakh women’s life has been saved. In the trying times of corona, the LPG for these women is a big boon, as the government is supplying them free cylinders for three months along with rebate for months of April, May and June.

Jahnabi Phookan, President FLO said, “Stepping into the new decade of 2020, my thoughts were of Sustainability and to focus on Sustainable Livelihood for women’s economic upliftment. For an Amanirbhar Bharaat, it is important to take the women along. Only by ensuring sustainable livelihood, we can lead women to her empowerment.”

Odisha CM takes up development of key infra projects with…