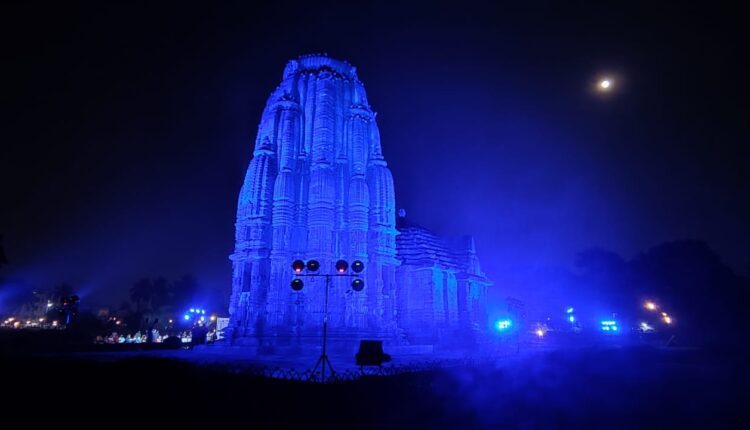 Bhubaneswar: In order to celebrate the first year of Cervical Cancer Elimination Movement, the first anniversary of the historic movement for which the world has committed to eliminate this type of cancer, Bhubaneswar Smart City Limited in association with the Archaeological Survey of India and KRIAA Foundation illuminated the 11th Century beautiful monument Rajarani Temple with teal colour. The colour represents cervical cancer elimination.

On this day last year, World Health Organisation (WHO) launched a global strategy to accelerate the elimination of cervical cancer as a public health problem, with a resolution passed by 194 nations. Countries and communities around the world marked this movement with a day of action and the launch of local campaigns.

This unique celebration, held for the first time in Odisha, advocates awareness is the key to overcome the menace called cancer and to facilitate the survivors to lead and share their stories. They were joined by high-level speakers representing a broad coalition of partners dedicated to eliminate the disease and four-time Grammy Award-winning artist Angélique Kidjo at the global level. In fact, communities across the globe illuminated over 100 landmark monuments in teal colour.

Lily Jenamani of KRIAA Foundation said, “We are taking the concept of ‘Lighting a Heritage’ a step forward in Odisha in association with the Bhubaneswar Smart City, Acharya Harihar Post-Graduate Institute of Cancer and Association of Obstetricians and Gynaecologists of Odisha. As a first of kind event in Odisha, we want to create awareness amongst the society and boost the morale of people affected by cervical cancer and help them to lead a normal life after the trauma of COVID-19 lockdown, for which all their treatment process had come to a grinding halt.’’

With inclusive approach in organizing its citizen-centric activities from creating awareness on non-motorised transport (NMT) and having a clean, green and livable city, the Bhubaneswar Smart City has been organizing weekly events with girls, women, youth, and transgender community and is also planning to include more citizen groups so that the cause will include more and more people. The city authorities under the directive of Managing Director and Chief Executive Officer of BSCL Sanjay Kumar Singh have now geared up to intensify the activities with the global focus is shifting gradually to climate change, global warming and low carbon mobility issues on the sidelines of the 2021 United Nations Climate Change Conference (COP 26).

British records reveal that the highly ornamental temple had a badly damaged `jagamohan’ and probably in 1903 it was rebuilt, but historians are still debating whether the temple was worshipping Shiva or Vishnu.

While noted historian MM Ganguly _ who carried out many excavations in Odisha _ rejects the hypothesis that the name Rajarani comes from an imagination that the site was a pleasure resort of Odishan king (raja) and his queen (rani) and advocates that the temple was a Vishnu shrine, famous Odia historian Krushna Chandra Panigrahi feels that the original name of Rajarani was Indresvara and the temple is a Shiva shrine.

Still, the presence of attendants holding tridents on the jambs of the door coupled with the figure of `Lakulisa’ at the center of the lintel and panels like the worship of the `linga’, figures of Nataraja and Parvati on the platform and scenes of Lord Shiva’s marriage to Parvati on the walls, strongly indicate Rajarani temple’s Shaivaite association.

Facing east, Rajarani temple consists of a sanctum (deula) with a height of 59 feet and a porch (jagamohana) raised above a platform of three mouldings. This is according to `pancharatha’ style in Kalingan architecture of temple building.

Another most striking feature at the first sight is the cluster of miniature `rekhas’ around the temple’s spire. This feature with the double `amalas’ (spheroid at the crown) impart an almost circular appearance to the entire structure and it is similar to the Khajuraho style.