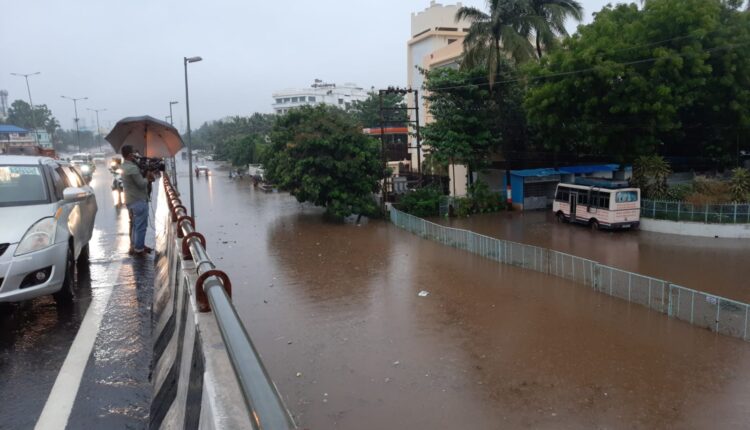 Bhubaneswar: As expected, many parts of the twin city were inundated and waterlogged after less than an hour-long rain today afternoon. Knee-deep water overflowing roads, swelling drains and vehicles stranded in the flooded streets were the common scenes across the twin city.

The stretch of the National Highway-16 in front of Iskcon temple in Bhubaneswar was flooded making impossible for vehicles to ply. Some motorists dared to cross the flooded street, but failed as ignition of their vehicles stopped. Finding no other option, either they moved out of the vehicle stranded in the flooded road or steered the wheel with help of some locals to high ground.

At the Iskcon temple, symbolic pahandi of the deities were performed. However, due to the flooded road the chariot pulling could not held.

Other places like Chintamaniswar, Jagannathpur and several places in Old Town in Bhubaneswar were inundated. Flood water entered basement of several apartments and low lying areas in the city.

Earlier, the Bhubaneswar Municipal Corporation claimed drains in the city were desilted and other necessary work were carried out as part of monsoon preparedness. But seeing the flooded streets in the city it has been understood that the claims have fallen flat.