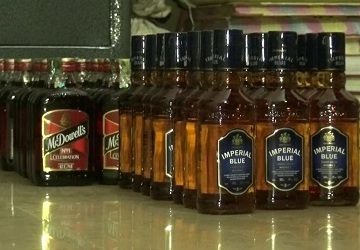 According to reports, one Simon Hansda, a BJD supported Sarpanch candidate from Betana panchayat was arrested and forwarded to court by Excise department officials on charges of bootlegging.

Mayurbhanj Collector had received complaints of Simon being involved in bootlegging.

Basing on the complaint, Excise department officials today raided his house. Officials seized as many as 63 bottles of Indian Made Foreign Liquor (IMFL) from his house during the raid.

However, Simon has clarified that he had not kept the liquor in his house for distribution among the voters but rather for the feast during his niece’s marriage and alleged that he has been trapped.

“I had not kept the liquor for distribution among voters. I had kept it for my niece’s marriage feast. I have been trapped,” said Simon.