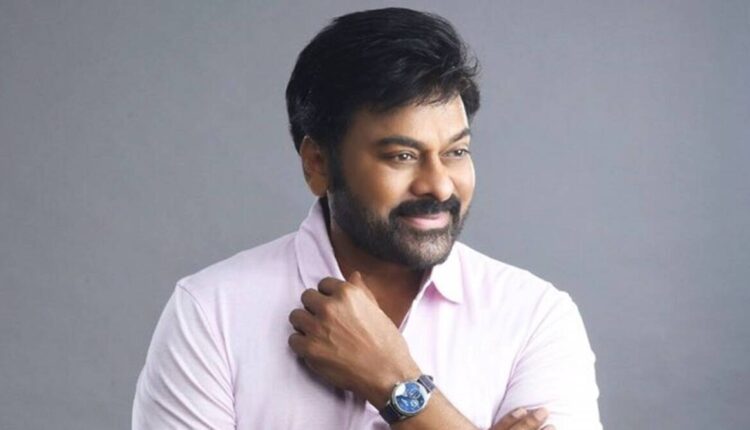 Hyderabad: As Telugu film icon Chiranjeevi turns 66 on Sunday, it’s celebration time for millions of fans. Known for his humility and helping nature, Chiranjeevi is fondly known as ‘Annaiah’ (elder brother) to his innumerable fans.

For the star himself, it is just one more milestone. In a career that saw him climb to the top of Tollywood, set up a political party and become a union minister, there has never been a dull moment so far. As he prepares for ‘Chiru154’, his 154th movie announced on the eve of his birthday (a day that also saw the poster release of his next, ‘Godfather’), the future looks as exciting as ever for the ‘immortal’ megastar.

When he set off for Madras (as it was known then), the old Mecca of the Telugu film industry, few would have imagined that Konidela Siva Sankara Prasad would go on to rule the Telugu marquee. But that’s precisely what the son of a police official in a sleepy Andhra town went on to achieve.

Apart from his own personal brand value as the leading name in Telugu filmdom, he is the head of the extended Konidela-Allu film family, which counts at least 10 star actors in its ranks. Chiranjeevi also paved the way for the entry of his brothers into the film industry. His youngest, Pawan Kalyan, is a star in his own right, and carving a niche for himself in politics too.

Around four decades on, and more than 150 movies after his screen debut, Chiranjeevi shows no signs of slowing down. The desire to succeed and ability to adapt to changing scenarios characterise his rise to the top.

But it has certainly not been an easy climb to the top, especially in a film industry long dominated by the likes of NTR, ANR and Krishna, who, incidentally, belong to the Kamma community, which has dominated the Telugu film industry for long.

Chiranjeevi scored with the fluidity of his dance moves. It coincided with the rising popularity of breakdance in India. He is also an action hero. As he engaged screen villains with his stylish renditions of stunts and fights, audiences would go ecstatic and greet him with cheers and whistles. Chiranjeevi movies such as ‘Jagadekaveerudu Atiloka Sundari’ remain etched in collective Telugu memory.

Even as he catered to ‘mass’ audiences, Chiranjeevi took care to see that his acting credentials were not diluted. Working with ‘class actors’ like K Viswanath in films such as ‘Swayamkrushi’, Chiranjeevi established himself as a versatile actor who could go beyond the routine of stunts-and-dance stardom.

Social service initiatives such as the Chiranjeevi Blood Bank, and coming to the aid of film fraternity members in times of need, have further endeared the megastar who, incidentally, is a devotee of Lord Hanuman, which explains why he chose his screen name Chiranjeevi.

A keen observer of social trends and audience tastes, Chiranjeevi has adapted his screen persona and roles to the prevailing ethos. From family dramas to potboilers, to quasi-art, and social thrillers – Chiranjeevi has switched with elan, from generation to generation.

Along the way, there have also been uncertain moments. In the 1990s, he seemed to be stagnating as an actor, and his movies were not doing too well at the box-office. Added to that, a new crop of young actors were catching the audience’s fancy. It was time for the megastar to change gears and direction, which he did.

Thought-provoking movies such as Tagore (2003) and Stalin (2006) made people sit up and wonder if the megastar was planning to enter politics.

In 2008, when the Telangana statehood sentiment was simmering, he took the political plunge. Setting up the Praja Rajyam party as an alternative to the ruling Congress, the opposition Telugu Desam Party, the emerging Telangana Rashtra Samiti and the BJP, Chiranjeevi tried to position himself as the messiah that Telugu people were waiting for.

The 2009 Assembly elections, however, turned out to be an anti-climax of sorts. The Congress under Dr Y.S. Rajasekhar Reddy stormed back to power. The fledgling Praja Rajyam Party secured a few seats and Chiranjeevi managed to win one of the two seats he contested. Perhaps realising that politics is not really his cup of tea, the astute strategist plotted his exit.

Following a merger with the Congress in 2011, he went on to become a Rajya Sabha member, and served as a minister of state in the Manmohan Singh government.

While still a member of the Congress party, Chiranjeevi has studiously kept away from politics, even as his younger brother and film star Pawan Kalyan’s Jana Sena Party sails with the BJP.

As he turns 66, Chiranjeevi continues his tryst with his first love – movies. But he chooses his projects after careful thought, assisted in part by his son and film star Ram Charan Tej.

With his latest movie ‘Chiru154’ to go on the floors, Chiranjeevi, the ‘Immortal’, shows no signs of slowing down. That is good news for millions of his fans and the Telugu film industry.

No threat to Hindus, temples in Afghanistan: Taliban Spokesperson