Bhubaneswar: With increase of COVID-19 positive cases in Odisha following return of a number of persons from West Bengal, three districts in the State have been designated as Red zone.

As per the latest list released by Union Health Ministry, Jajpur, Bhadrak and Balasore districts in Odisha have been classified as red zone.

Meanwhile, Khordha district enlisted as the red zone earlier now comes under orange zone category with a number of recovery cases in a past few days.

Along with Khordha, five other districts — Sundargarh, Kendrapara, Koraput, Dhenkanal, Kalahandi — have been classified as orange zone with minimal number of COVID-19 positive cases so far.

Besides, remaining 21 districts that have not reported any case over 28 days have been designated as green zone.

Here’s the full list of Red, Organge and Green zones in Odisha: 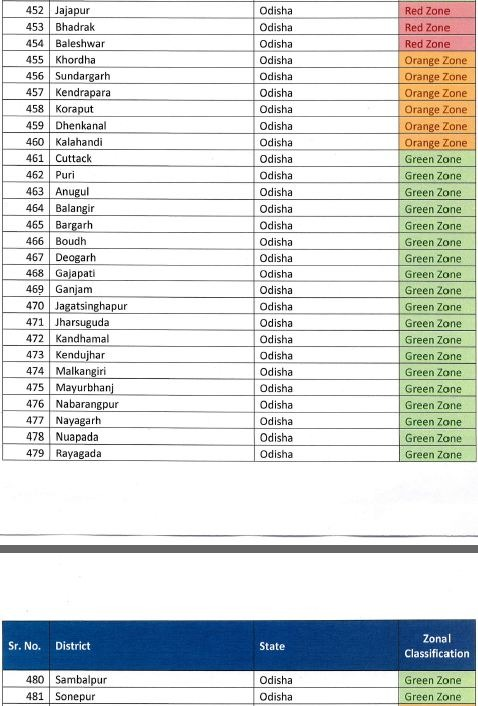 Moreover, the Union health ministry has designated all major metropolitan cities – Delhi, Mumbai, Chennai, Kolkata, Hyderabad, Bengaluru and Ahmedabad – as red zones after the lockdown ends on May 3, and asked states and local bodies to demarcate containment areas and buffer zones for strict monitoring of movement.

In a letter to chief secretaries of all states and union territories, Union Health secretary Preeti Sudan gave a list of 130 red zones, 284 orange zones and 319 green zones at the district level across the country for containment operations.

“All States are accordingly requested to delineate the containment zones and buffer zones in the identified red and orange zone districts and notify the same,” Sudan said.