[Watch] First Glimpse of ‘Liger’ shows rise of an underdog 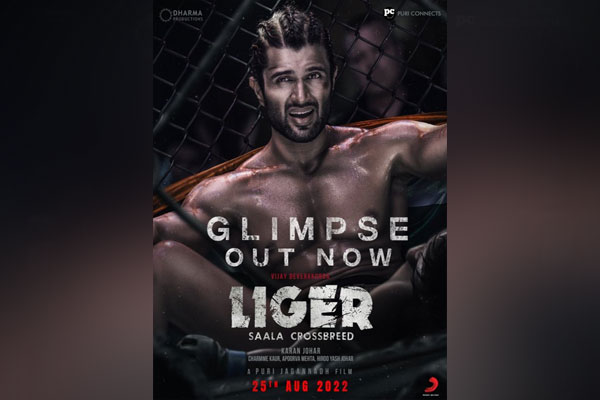 Hyderabad: Vijay Deverakonda’s first glimpse from ‘Liger’ was unveiled on Friday. The makers unleashed the look on the occasion of New Year’s eve and introduced the star as an underdog who emerges from the slums.

Vijay kicks off, as the champion of Mixed Martial Arts.

The first glimpse of ‘Liger’ begins with an MMA commentator introducing Vijay as “The boy from India, the slumdog from the streets of Mumbai, and the chaiwala..Liger”.

Also, the clip hints at the backdrop of ‘Liger’, Vijay, who is introduced as the ‘chai wala’.

In the video, the 32-year-old actor is seen walking on the streets of Mumbai, along with his mother, played by actress Ramya Krishnan.

With a couple of impactful dialogues, Vijay creates much appeal to his introduction in the video.

He says: “Vaat lagaa denge”, his character is established as an angry young man.

Indicating his complete physical makeover, Vijay looks with a chiseled physique and sports a completely new cornrows hairdo along with a ponytail.

Puri Jagannadh has helmed this pan-India movie, which is being made in multiple languages.

Vishnu Sarma is handling the cinematography for ‘Liger’, while Kecha from Thailand is the stunt director.

Being made in Hindi, Telugu, Tamil, Kannada, and Malayalam languages, the movie is scheduled for release in theaters worldwide on August 25, 2022.

Ranveer Singh opens up on completing 10 years in Bollywood

No New Year celebration at Govt offices in Odisha