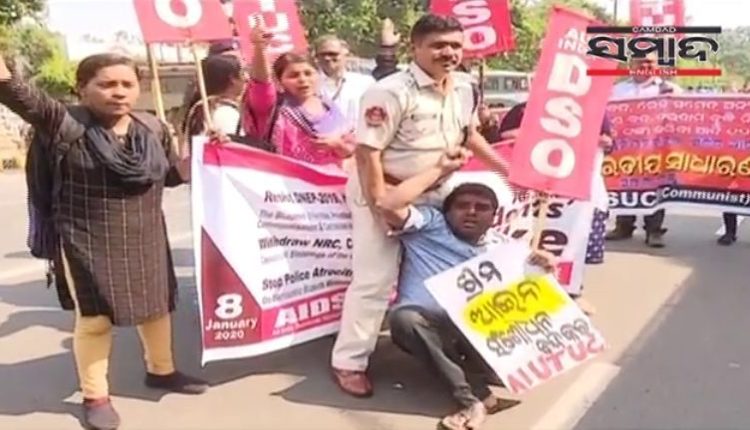 Bhubaneswar: The 24-hour bandh being observed by central trade unions today got a mixed response across Odisha. Normalcy was affected and roads wore a deserted look with bus and trucks staying off the roads and rail traffic getting partially affected. At most places, bus services were suspended till 5 pm.

Shops and business establishments remained closed in many parts of the State. As a precautionary measure, education institutions were shut by the district administration of several districts.

During the observance of the nationwide strike, government offices were opened today. Acting as per the State government’s directive, employees of Lok Seva Bhawan, Kharvela Bhawan and Rajiv Bhawan were seen reaching offices by 9.30 am. Ministers and senior bureaucrats were no exception and arrived at their offices before 9.30 am.

The strike has been observed peacefully till yet without any incidents of violence and reports of untoward incident in the State.

The Commissionerate Police arrested several Congress activists including OPCC chief Niranjan Patnaik on charges of staging protest during the bandh. As per reports, 500 protestors and leaders of political parties were arrested in Bhubaneswar alone. This apart, police have arrested agitators across the State.

In order to maintain law and order, the Commissionerate Police has deployed 15 platoons of police force and striking force. ADG (Law and Order) Soumendra Priyadarshi said adequate police forces have been stationed at the sensitive places in the State.

The central trade unions are observing the 24-hour nationwide strike from 6 am today demanding a 12-point charter of demands.