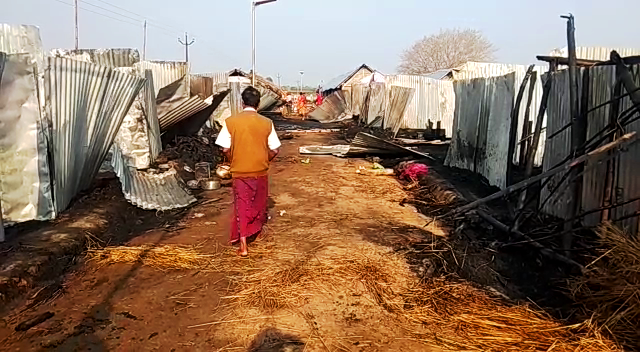 Baripada: Tragedy struck several displaced families residing in Sialinai village under Karanjia block in Mayurbhanj district after a major fire broke out in the locality reducing as many as 27 rooms to ashes last night.

Sources said several displaced families of Similipal sanctuary had shifted to Sialinai village in June last year. They were staying in temporary accommodation in a slum for the last seven months. Last night, a fire erupted in a room and quickly spread to the neighbouring rooms.

However, the cause behind the fire is yet to be ascertained.

Earlier on January 22, 16 rooms of displaced families of Similipal sanctuary were gutted in fire in the same village.

Meanwhile, the displaced families alleged that such mishap are frequently occurring due to the apathetic attitude of the district administration towards them.

“The district administration has not provided proper accommodation to us. We are facing much difficulty here. We would go back into the forests if the Government does not take any steps for our proper rehabilitation,” said a woman.