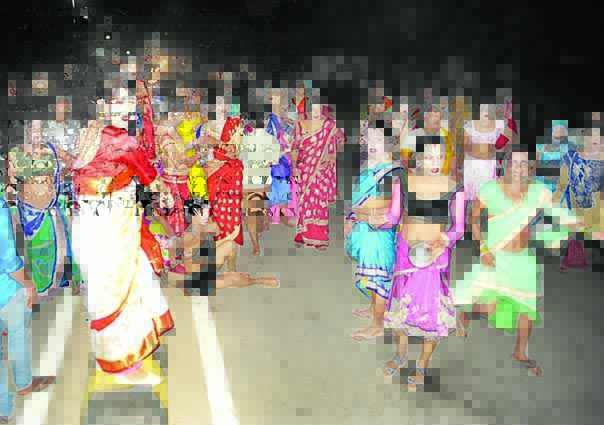 Bhubaneswar: Kalinga Studio Square turned a battlefield with the clash erupted between two groups of transgenders during a procession here on Wednesday.

At least 10 transgenders were injured in the group clash, which lasted for around one hour on outskirts of Bhubaneswar last night.

Police reaching the spot resorted to lathicharge to disperse the transgenders after situation turned violent.

According to reports, a transgender group identified as Sweet Kinnar of Bharatpur area had organised a procession of Khudurukuni deity on Wednesday night with permission from the Commissionerate police. The procession was scheduled to be taken out from Bharatpur slum to a temple near Kalinga Studio. However, this was opposed by another transgender group Meghna Kinnar. Earlier, the Meghna group had warned them of not making the procession successful.

The Sweet Kinnar group had earlier informed the police about the threat from Meghna group. On basis of the information, one platoon of police led by Khandagiri IIC Himanshu Bhushan was deployed on the site to avoid any untoward incident. Although, no violence took place till the procession reached Kalinga Studio square. Suddenly, the group clash erupted near Meghna slum.

The transgenders of two groups attacked each other with sticks following which several transgenders were injured. Police stopped the procession midway. After the situation intensified, police started lathicharge on the groups.

It is yet to be clear how the clash took place near Meghna slum despite police deployment.

However reports said that the tension erupted while Sweet Kinnar supporters, who are residing in the Meghna slum, were waiting for the procession.

No allegation has been filed with the police so far. The injured transgenders were admitted to different hospitals for treatment. In view of the situation, the administration deployed two platoons of police forces at Kalinga Studio square.

Many injured in THAAD deployment protest in S. Korea