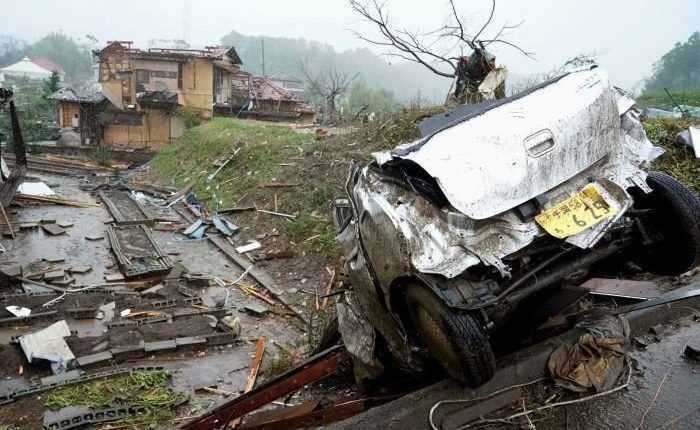 Tokyo: Torrential rain and tornado-like winds are lashing large parts of Japan, as the country endures what could be its worst storm for 60 years.

The eye of Typhoon Hagibis made landfall shortly before 7 p.m., on Saturday, in Izu Peninsula, south-west of Tokyo, the BBC reported.

It was moving up the eastern coast of Japan’s main island, with wind speeds of 225 kmph.

Two people are said to have died, one a man whose vehicle flipped over in high winds in Chiba prefecture, east of Tokyo. The second was washed away in their car, local reports said.

NHK said 90 injuries had been reported by the early hours of Sunday local time, and nine people were missing.

More than seven million people have been urged to leave their homes amid severe flood and landslide warnings, but it is thought only 50,000 are staying in shelters.

“Unprecedented heavy rain has been seen in cities, towns and villages for which the emergency warning was issued,” JMA forecaster Yasushi Kajiwara told a press briefing.

“The possibility is extremely high that disasters such as landslides and floods have already occurred. It is important to take action that can help save your lives.”

Japan’s Meteorological Agency (JMA) has warned that half a metre of rain could fall on the Tokyo area between midday on Saturday and Sunday.