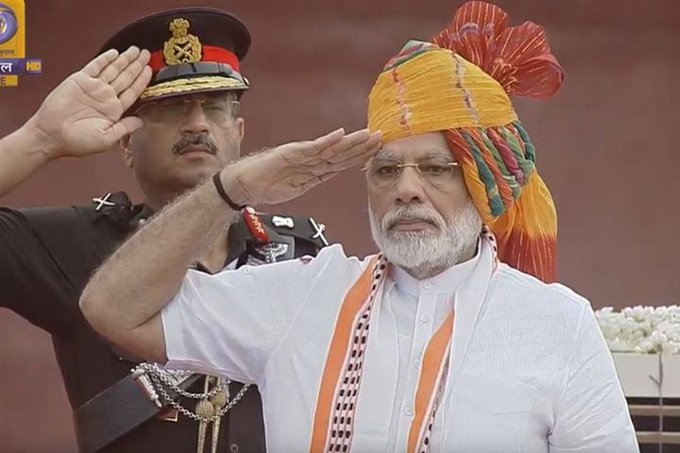 New Delhi: In a major move, Prime Minister Narendra Modi on Thursday announced the creation of the Chief of Defence Staff (CDS) post, that has been a long-pending recommendation of various defence panels.

Addressing the nation from the ramparts of the Red Fort on the occasion of 73rd Independence Day, Modi said: “I want to announce a major decision from the Red Fort: India will have a Chief of Defence Staff — CDS. This is going to make the forces even more effective. The new CDS post will oversee all the three wings of the armed forces.”

The creation of a CDS post had been a major recommendation of the Kargil Review Committee — of integration of the three services — Army, Navy and Air Force — under a Chief of Defence Staff. However, no concrete action was taken on this, until now.

The government appointed Lt Gen D.B. Shekatkar (Retd) as head of an 11-member committee to recommend measures to enhance the combat capability of the armed forces and re-balance defence expenditure.

5 things everyone feels nostalgic about on Independence Day

Now One Nation, One Constitution: Modi over Article 370…

The committee suggested a four-star Chief of Defence Staff as the chief military adviser to the Defence Minister.

The Prime Minister’s announcement was immediately welcomed by former Army chief General Ved Prakash Malik (retd), who was the army chief during the Kargil War.

“Thank you PM Modi for announcing historic step of institution of CDS. This step will make our national security more effective and more economical. It will ensure better jointmanship and multi-disciplinary Acoordination. Salute,” he tweeted.

Confident that changes in Kashmir will benefit people: President