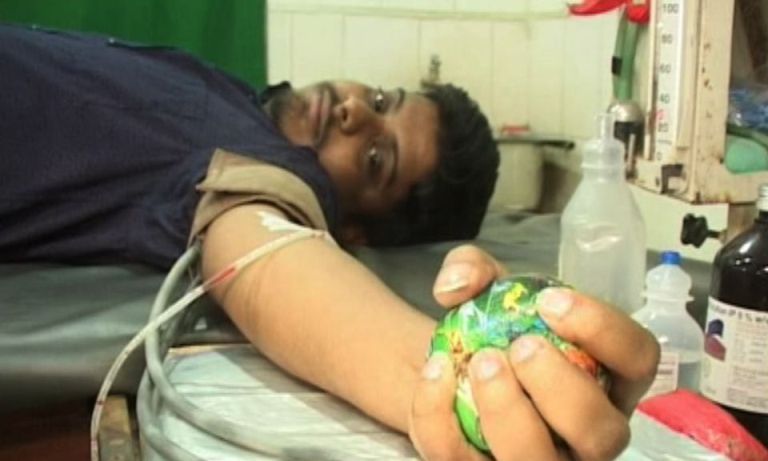 Jeypore: A doctor turned true saviour setting an example for others in the medical profession by donating his own blood to a patient here in the town of Odisha’s Koraput district.

Dr Bhupati Bhusan Jena, a medicine specialist in Jeypore sub divisional hospital, became talk of the town for showing humanity to a poor woman patient. He donated one unit blood to save the patient suffering from acute shortage of hemoglobin.

According to reports, the patient Mani Golari (27) of Doraguda village under Boipariguda block in Koraput district was admitted to Jeypore hospital on Tuesday in critical condition. Dr Jena, who was treating her, asked her husband Madan Golari to arrange three units of blood immediately to save the patient. However, after arranging only one unit of blood, Madan expressed his helplessness to the doctor to arrange another two units of blood for transfusion. The doctor realised that the required blood was not available and he was ready to become a donor and save the patient.

The doctor donated blood to save my wife realising my condition, said the patient’s husband Madan Golari.

Earlier in March, a similar instance of showing humanity by a doctor was reported in media from Kandhamal district. Dr Yajnadutta Rath became god for a patient when trekked a hill and crossed a river to rescue a woman, who was into labour pain on her way to the hospital in the forest under Tumudibandha block of the tribal district.

Another doctor Omkar Hota also hit headlines in November last year for standing true to his duty. He carried a tribal woman, who was bleeding after delivering child, on his shoulders for 10 km to a Public Health Centre (PHC) in Paplur of Malkangiri district.