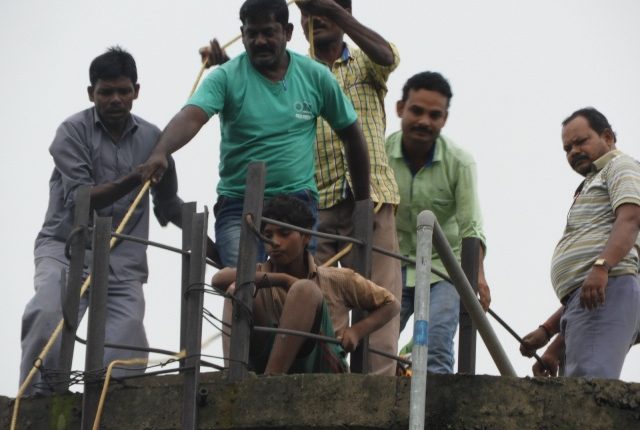 Rourkela: When the Almighty protects you, nothing on earth can take your life. The strong belief system turned out to be true in case of a minor boy, who survived with no food inside a huge water tank for over a week in Odisha.

The incident has been reported from Bondamunda on outskirts of Rourkela in Odisha’s Sundergarh district where a missing minor boy was rescued alive after being stuck inside an overhead water tank for 10 days.

According to reports, the 14-year-old boy of Dumerta Cinema Toli village under Bondamunda police limits was missing from home since August 18.

Sources said that the boy got stuck inside a 30-ft-high water tank located at a Railway Colony in Bondamunda while running after a pigeon to catch it. He had climbed atop the water tank alone and entered into it out of curiosity. However, he failed to come out of the tank. He shouted for help, however, all his efforts went in vain as the water tank was situated in an isolated place and it was huge in height.

As the boy did not return to home for hours, his family members started searching him at the locality. Finally, they informed the police to know his whereabouts.

With no option left, the victim struggled to live inside the tank and survived with only water for 10 days. He had continued to make efforts to get out of the tank by shouting for assistance. Finally, his fate helped him on Wednesday morning as some locals heard screaming of a boy coming out of the water tank. After they climbed atop the structure, found a boy inside it. They immediately informed the drinking water department of Railways, seeking assistance.

Acting quickly on information, the officials rushed to the site and fished him out of water tank with help of a rope. On receiving information, police reached the place and took him to the Railway Hospital, Bondamunda for treatment. He was handed over to his family after the doctors declared him clinically fit.

“I survived inside the water tank for 10 days. I struggled lots with water. The water level at the tank was sometimes rising and falling. Accordingly, I was managing to stay inside the tank. I was shouting for help and finally came out of the tank alive,” said the victim.

Rourkela Hospital OPD to be closed over detection of COVID…