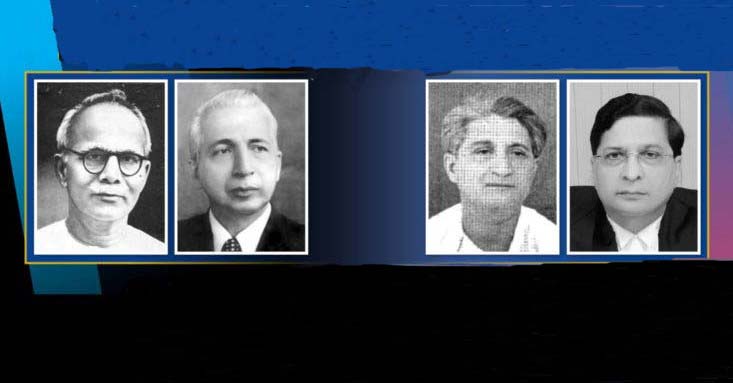 Many successful politicians of our country are from legal profession. It is also not very uncommon to find successful legal practitioners and politicians in the same family. But Odisha has a family that has given two Supreme Court Chief Justices to the country. And most interestingly, both of them are sons of legislators who served for two terms in the State Assembly.

Yes, we are talking about the family of Pandit Godavarish Mishra, one of the founders of Congress Party in Odisha and a member of the Famous Five, the ‘Pancha Sakhas’ of Satyabadi.

Odisha has contributed 3 CJIs so far. The first Odia to be elevated to this position is Justice Ranganath Mishra who was sworn in as the 21st Chief Justice of India on 25th September 1990. He is the youngest son of Pandit Godavarish Mishra, who not only spearheaded Congress movement in the state, but also got elected to the First Elections to the Pre- Independence State Assembly in 1937. He was elected from West-Khurda constituency and went on to become the Minister of Home, Education, Finance and Development in 1941. He had a second term in the State Assembly after Independence winning from his home town Banapur as an Independent in 1952 General Elections.

Godavarish and Ambica Devi had 3 sons- Raghunath (b.1916), Lokanath (b.1922) and Ranganath (b.1926). Of the three, it was the youngest son Ranganath Mishra who earned the distinction of being the first Odia Chief Justice of the Supreme Court.

After Ranganath, Justice Gopal Ballabh Patnaik was the second Odia to rise to the position of CJI. And after him came Justice Deepak Mishra who served as the 45th CJI from 28th August 2017 to 2nd October 2018. Incidentally, he also belonged to the family of Pandit Godabarish, born to Raghunath and Chanchala, the eldest son and daughter in law of Godabarish.

Compared to Ranganath and Lokanath, two illustrious sons of Odisha, Raghunath Mishra is less discussed, primarily because he remained confined to Banapur looking after the affairs of the family. He was a dedicated teacher and carried on with social work. After the death of Godavarish in 1956, he fought the Assembly Elections from Banapur and got elected in 1961 defeating Poet Satchi Routray from Congress. He again got elected from Banapur for a second term in 1967. This time his closest contestant was Ramachandra Praharaj, an Independent.

Raghunath Mishra was the Secretary of Godavarish Vidyapeeth and Godavarish Mahavidyalay, Banapur set up in the name of his father. He was also the author of quite a few text books for children. He had compiled and got published the famous autobiography of his father, ‘Ardha Shatabdi ra Odisha o tanhire Mo Sthana’ (Odisha of half a century and my place in it) with a preface of his own.

Strange but true, Odisha has contributed two CJIs to the country from the same family and the fathers of both CJIs, two term legislators!