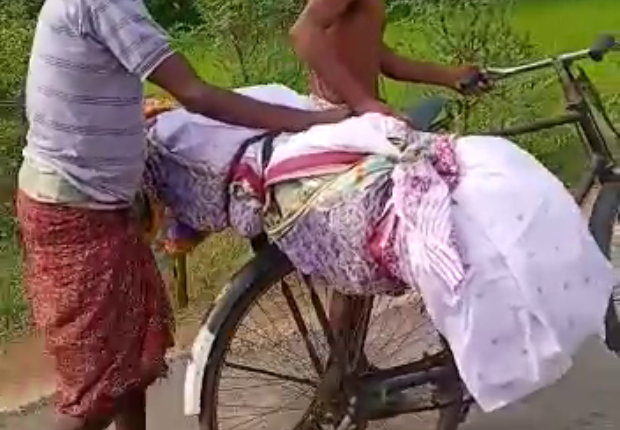 Nabarangpur: A disturbing footage emerged of a woman’s body being carried on a bicycle by her two sons to crematorium after villagers reportedly boycott funeral ceremony in Odisha’s Nabarangpur district today.

The incident was reported from Motigam village under Chandahandi block in the tribal district where a body was denied shoulders due to past dispute with villagers.

According to reports, a woman namely Nuakhai Pandey passed away at her residence last evening. As the family had conflict with some villagers belonging to their community, her relatives denied to lend their shoulders to the body.

With no option left, the deceased woman’s two sons carried the body on a bicycle to an open area near a river for cremation today.

“Without support of villagers, we two brothers managed to bring the body on a bicycle for cremation. Though our mother died last evening, the uproar created by villagers out of past rivalry obstructed us to follow the rituals. However, we carried the body on bicycle and reached the venue despite hindrance,” said one of sons of the deceased.

Odisha woman sets herself on fire over dispute with hubby