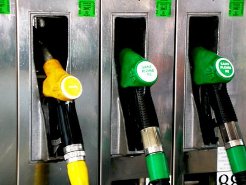 New Delhi: Petrol prices across the four metros were stable on Saturday. In the national capital, the fuel was sold at an unchanged price of Rs 76.35 per litre.

On Friday, petrol prices fell by eight paise in Delhi, Kolkata and Mumbai and by nine paise in Chennai.

Fuel price in the country is largely determined by global crude oil prices, which have been on a downslide for nearly a month now. The Brent crude oil is currently priced over $73 per barrel, down from nearly $80 a barrel a month ago. (IANS)