Save Soil Movement: After covering 26 nations on motorcycle, Sadhguru gets rousing welcome in India 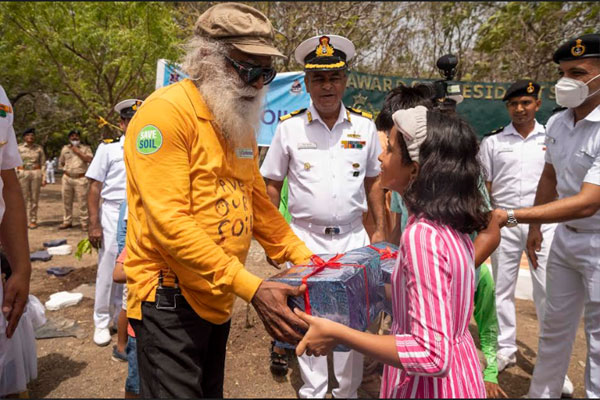 After riding through the bone-rattling chill of Europe and the furnace of the Arabian desert, Sadhguru, founder of Isha Foundation, set foot on the soil of Bharat alighting at the Jamnagar port in Gujarat after his #JourneyForSoil met with resounding success in Europe, Central Asia and the Middle East.

Sadhguru sailed for three days on the Indian Ocean after leaving from Port Sultan Qaboos, Oman, to reach India’s west coast. He received a rousing welcome from the Indian Navy, as their band played the Save Soil anthem. 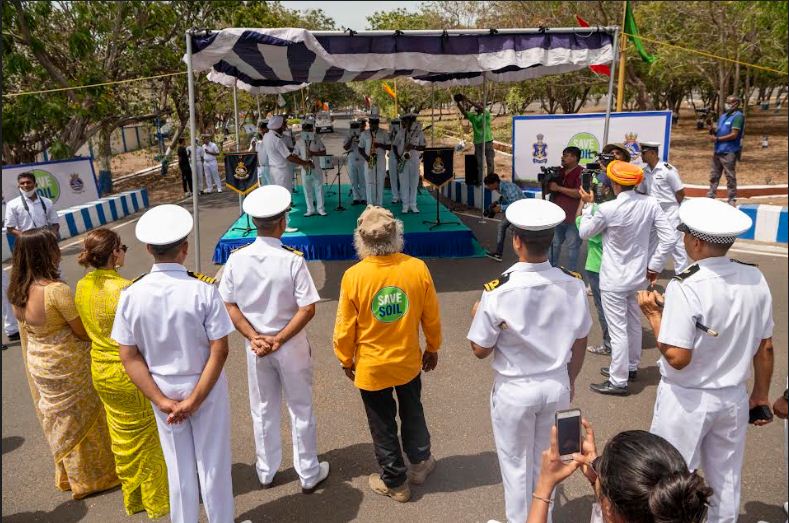 Ektaba Sodha, representative of Jamsaheb, Jamnagar, some religious and political leaders also joined the  Commanding Officers of the Indian Army, Navy and Air Force to receive Sadhguru at the Port.

Amidst all the pulsating drumbeats, vibrant folk performances and high-voltage slogan chants from thousands across states, Sadhguru addressed the crowd, asking them to keep up the momentum to save soil.

“At least for the next 30 days, you must keep your voice full up, not a one-day shouting. In a sustained way for 15-20 minutes every day, keep the message up till we hear that every government in the world makes policy to regenerate the soil,” he said.

Reiterating that we all hold a powerhouse in our hands in the form of a phone, he urged everyone to make use of social media to speak about soil.

“When you have power like this, we must make it happen,” he added. 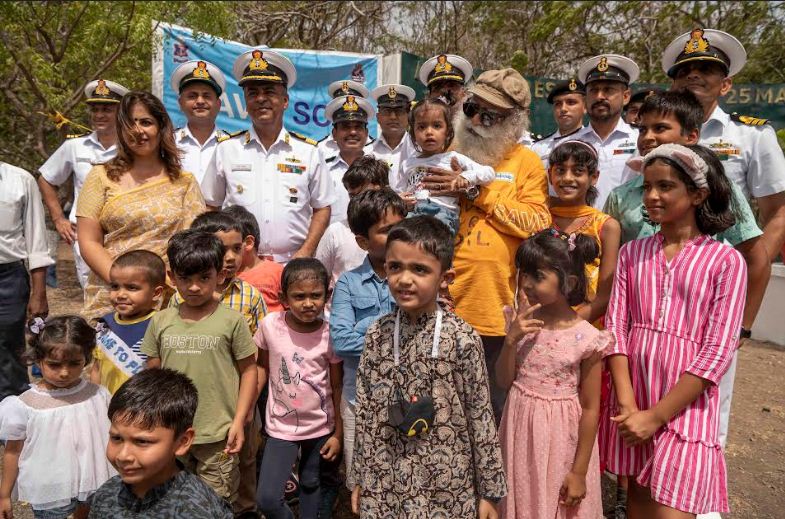 Ektaba Sodha mentioned that it was her pride and privilege to be part of the event.

“He’s been influencing policy change, he’s been educating, he’s been creating awareness about save soil, and it’s very important to know that today is the second time in the history of Jamnagar,  that at the invitation of the royal family a civilian is arriving at the cargo port with a special notification,” she said.

Walking to his motorcycle, which arrived with him on the tugboat, Sadhguru acknowledged the performing artists.

Sadhguru is currently on a 100-day, 30,000 km #JourneyForSoil after launching the global movement to save soil from extinction this March. His journey began in London on March 21 and will culminate in the Cauvery river basin in late June.

He then got into the now familiar act: revving up his motorcycle. Riding through the port past a serpentine line-up of hundreds of Save Soil volunteers, Sadhguru acknowledged their roaring cheer before proceeding to the Navy Gate where the Navy Band struck up a musical tribute in the presence of the Commanding Officer and senior naval officers. With a heartfelt gesture, Sadhguru exited the port to continue his journey in India.

The primary objective of the Save Soil Movement is to urge all nations of the world to mandate a minimum of 3-6% organic content in agricultural soils through urgent policy reforms. Without this minimum organic content, soil scientists have warned of the imminent death of soil, a phenomenon they are terming as ‘soil extinction.’

In India, the average organic content in agricultural soils is estimated to be 0.68% placing the country at high risk for desertification and soil extinction. Nearly 30% of fertile soil in the country have already become barren and are incapable of yield. It is estimated that nearly 25% of fertile land has been desertified globally. The United Nations has warned that at current rates of soil degradation, 90% of the earth could turn into desert by 2050- less than three decades from now.

The Save Soil Movement is supported by the United Nations Convention to Combat Desertification (UNCCD), the United Nations Environment Programme (UNEP), the UN World Food Programme, and the International Union for Conservation of Nature (IUCN). Since Sadhguru began his journey 68 days ago, 74 nations around the world have pledged concrete action to save soil in their countries.