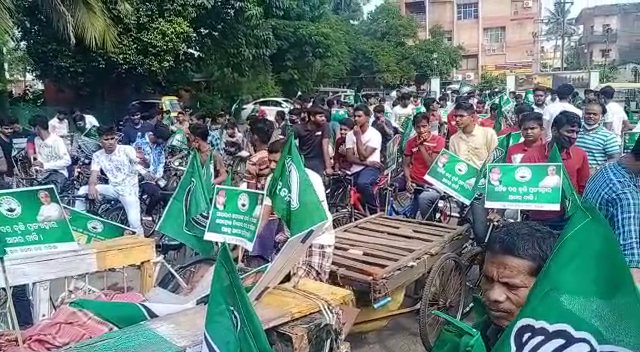 Bhubaneswar: A day after the Centre reduced excise duty on petrol and diesel by Rs 5 and Rs 10, respectively, the youth and student wings of ruling Biju Janata Dal (BJD) decided to put off their agitation over fuel price hike for 10 days from tomorrow.

“The Centre was left with no option but to cut the excise duty on petrol and diesel following mass protest by BJD. We have put off the agitation for next 10 days. But we will intensify our stir and hit streets again, if the Centre does not pay heed to our demand of reduction in LPG prices,” he cautioned.

He further said, “After Centre, Chief Minister Naveen Patnaik today announced reduction in VAT of Rs 3 on petrol and diesel with effect from  November 5. This is a welcoming step though it would result in a total loss of Rs 2,000 crore to the state exchequer.  With the reduction, petrol and diesel prices in the state are likely to be one of the lowest in the country.”

A day after the Central Government reduced excise duty on fuel, price of both petrol and diesel dipped in Odisha today. While petrol was sold at Rs 104.73 per litre in the capital city today, the rate was Rs 105.51 in Cuttack. Petrol price had crossed Rs 110-mark in all districts of the state, a couple of days ago.

China to have up to 700 deliverable nuclear warheads by 2027: Report