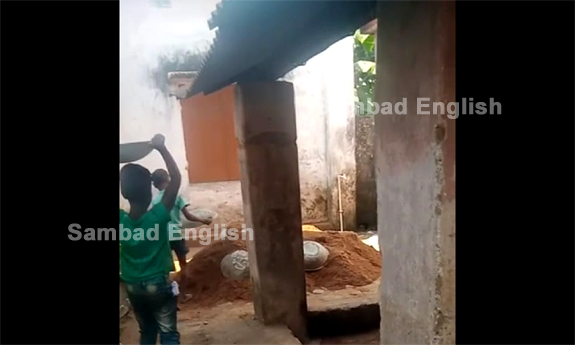 Nabarangpur: A few students of Pitariguda UP School of Nuakote panchayat under Papadahandi block in Nabarangpur district were allegedly engaged yesterday in the roof repair work of a dilapidated building on the educational institution premises, a video of which went viral on social media today.

Schools in Odisha are usually declared as punishment-free and child labour-free areas. This UP school has around 122 students in Classes starting from I to VIII. The accused headmaster named Gautam Sahoo had asked the students to the school even if it was Sunday, a source said.

The roof had run down and rainwater was leaking through it. A student of Class V named Lambodar Majhi, including three students of Class VIII namely Nabin Gouda, Madhab Gouda and Ganapati Majhi along with a mason and some labourers were allegedly engaged in the repair work.

When contacted, the headmaster Sahoo said, “Pitariguda UP School has no compound wall. Hence, a few students had entered into the premises and were playing. When I had gone to the managing committee president’s house to enquire about the mason, somebody intentionally engaged the four students in the work and prepared a video of the same.”

“This was done with an ill-motivation to tarnish my image,” Sahoo further said.

On the other hand, parents of the students said that the schoolchildren were asked to go by the headmaster. Block Education Officer (BEO) Birendra Kumar Padhi said, “Appropriate disciplinary action will be taken against Sahoo if the headmaster is at fault.”