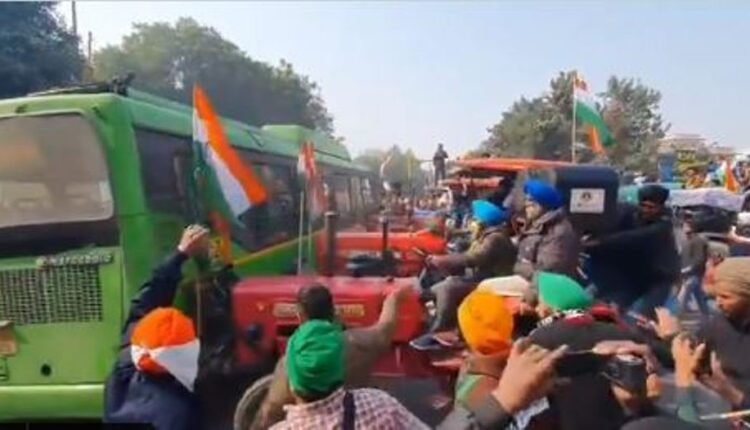 New Delhi: Farmers, who were seen as friendly and peaceful for more than 60 days as they waited for government to accept their terms, suddenly left behind a trail of vandalism, violence, hooliganism as they hoisted their flags at the 17th century iconic Red Fort after running amok through the capital clashing with the police personnel in several parts of the national capital.

IANS brings the entire timeline of the farmers proposed ‘Kisan Gantantra parade’ that turned violent unexpectedly and went from peaceful to bloody becoming “Occupy Delhi” movement in no time.

11 a.m.: Police fires tear gas shells and resort to mild lathi-charge. While some farmers armed with swords clash with police. Farmers move towards Sarai Kale Khan after deviating from the route assigned to them before the conclusion of the Republic Day parade at Rajpath.

The Farmer Ganatantra Rally was scheduled for 12 to 5 p.m.

Farmers chase police with their tractors, again damage several DTC buses near ITO as they are prevented from moving towards the Red Fort.

Hundreds of farmers riding tractors, bikes and cars reach Red Fort portico and enter its premises and hoist the farmer union flags and saffron pennant with a Sikh religious symbol on the first rampart of the iconic 17th century monument.

1 p.m.: A farmer named Navneet Singh dies after a tractor in which he was travelling turns turtle. However, the farmers claimed that he was shot dead. Farmers sit with the dead body at ITO over the death of the farmer. Police enters Red Fort premises and tries to remove the farmer union flags. This is exactly from where Prime Minister hoists the national flag every year on Independence Day.

Thousands of farmers from Punjab, Haryana and western Uttar Pradesh have been camping at the several borders of the national capital since November 26 last year demanding the repealing of the three farm laws. Eleven rounds of talks of farmers with the farmers in last two months have remained inconclusive.

We have to build ‘Aatmanirbhar’ India: Prez…