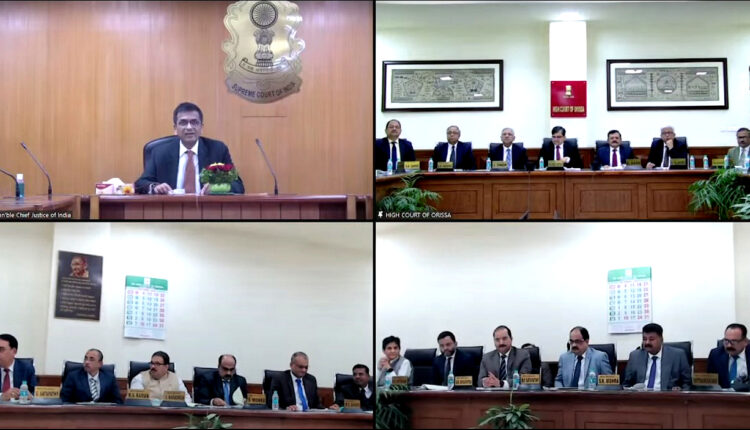 Bhubaneswar: District Court Digitisation Hubs (DCDH) were inaugurated today in 10 districts of Odisha by the Chief Justice of India, Dr Justice D Y Chandrachud in virtual mode in presence of Dr S Muralidhar, Chief Justice and the Judges of High Court of Orissa.

Space Management is one of the major challenges for the Courts. Constant inflow of papers into the Courts creates huge problems in storage and much of the manpower, office hours and office space is consumed for storage of the case records. Procuring physical records for grant of certified copies, prevention of damage to the records, safe-keeping of records of lower Courts and reconstruction of damaged records are challenging tasks in physical storage of records.

The concept of digitisation was introduced by the e-Committee, Supreme Court of India to overcome these problems. By the process of digitisation the risks of damage and misplacement of documents from the physical case records can be avoided and softcopies of the records can be safely stored for easy access for various purposes such as hearing in paperless courts, grant of certified copies etc.

Initially, four District Court Digitisation Centres (DCDCs) were set up on a pilot basis in Cuttack, Ganjam, Sambalpur and Balasore on 30th April, 2021.

Due to encouraging results from the 4 DCDCs the High Court of Orissa decided to upgrade these Centres into District Court Digitisation Hubs (DCDH).

Further, DCDHs have been inaugurated in 10 more Districts namely Angul, Bhadrak, Jharsuguda, Kalahandi, Keonjhar, Koraput, Malkangiri, Mayurbhanj, Nayagarh and Sonepur. These hubs will cover digitization works of all the 30 districts of the state.

Each DCDH would be assigned with the digitisation work of the nearby Districts.

The objective of the DCDH would be to digitise the disposed of case records of the parent Districts as well as that of the nearby assigned Districts. The scanning work for the paperless courts of the said nearby Districts would also be taken up in the concerned DCDH.

Justice D Dash welcomed the Chief Justice of India and the guests. He highlighted a host of ICT initiatives undertaken by the e-Committee, Supreme Court of India under the chairmanship of Justice Chandrachud.

Justice Dash said digitisation in the High Court and District Courts of Orissa has gained momentum from 2021 after the assumption of office by Dr S Muralidhar as the Chief Justice.

Chief Justice, Dr S Muralidhar stressed upon the need of harnessing technology as an effective tool for imparting quality justice. He said the establishment of e-facilitation centres in all the Districts and regular training of all the stakeholders has helped a lot in reaping the benefits of the ICT initiatives like e-filing, e-payment of Court fees, Virtual hearings etc.

The Chief Justice informed about the High Court’s decision to provide touch screen laptops to every judicial officer of the State with a view to facilitating the officers to work paperless. He expressed happiness over the fact that the facility of e-filing is now available to a lawyer or a litigant of the remote corners of the State.

Dr Muralidhar thanked the Chief Justice of India for acknowledging the ICT works undertaken by the High Court of Orissa in the recently concluded conference of Chief Justices at Delhi.

In the inaugural address, Dr Justice Dhananjaya Y Chandrachud applauded the ICT measures of the High Court of Orissa and said the digitisation work undertaken by the High Court under the leadership of Dr S Muralidhar is now a role model for all the High Courts of the country.

The Chief Justice of India emphasised on digitization as the most important step towards modernisation of judiciary, especially the trial courts which are the backbone. He highlighted the benefits of digitisation, such as easier access to records by authorised persons, organized information keeping, reduction of time to search documents, security of the documents and records etc.

The Chief Justice of India also stressed that digitisation must be accompanied with pushing e-filing otherwise it would be difficult to go on digitizing everything which is filed in physical form in long run. Hailing the initiatives of the High Court of Orissa, Dr Chandrachud said very soon the High Court would be mentoring the entire judiciary of the nation in the field of digitisation.

Proposing the vote of thanks, Justice Sashikanta Mishra said the words of the Chief Justice of India would encourage the activities undertaken by the High Court. It is believed the DCDHs would facilitate achieving the goal of making all the courts in the state paperless.

Justice D Dash, Chairman and the members of the RRDC Committee of the High Court were present on the occasion. The District Judges, Judicial Officers, Office Bearers of the Bar Associations and the officials of the district administration attended the event through virtual mode.