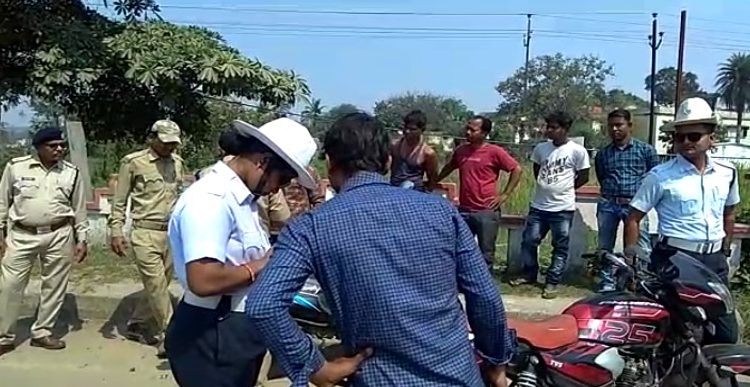 Bhubaneswar: Now the graduate constables can impose fines under the new Motor Vehicles (MV) Act in Twin City Bhubaneswar and Cuttack as the State Government has empowered them to prosecute the traffic violators.

The State Commerce and Transport Department approved a proposal by the Commissionerate Police to authorise the constables to issue challan against offenders of traffic rules under the MV Act.

This system will be functional as a pilot project only in Bhubaneswar and Cuttack cities for one year.

With the new order, the Commissionerate Police can intensify the crackdowns against traffic violators for strict enforcement of road safety regulations in Twin City.

“Though road safety is one of the priorities of the State Government, the drive cannot be enforced strictly due to shortage of officers, who are empowered to issue challans under the MV Act. The new order would help the Commissionerate Police to implement the traffic rules in strict manner in Bhubaneswar and Cuttack cities,” a source in the Commissionerate Police said.

Currently, officers in the rank of Assistant Sub-Inspector (ASI) or above were empowered to impose fines under the MV Act in Odisha.

Recently, the Commissionerate Police had requested the State Government to empower its traffic constables to prosecute the traffic violators in Bhubaneswar and Cuttack.

According to reports, there are 27 traffic officers and 402 constables in Twin City. Even as the constables are authorised to enforce the traffic rules, they do not have power to issue challans for traffic violations for which commuters breaching the rules usually misbehave with them.

However, the graduate constables are now authorised to prosecute persons, who are found violating the traffic rules.

The move came nearly a week ahead of enforcement drive against two wheeler riders for not wearing helmet from April 1.