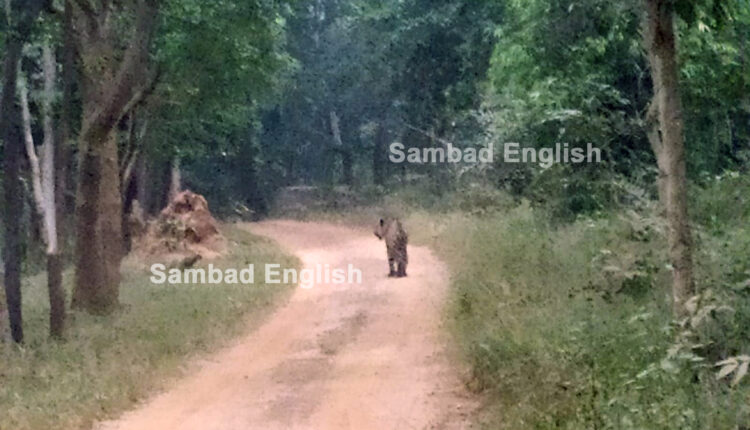 Bargarh/Sambalpur: After a gap of nearly five years, the presence of a Royal Bengal Tiger was captured in a mobile camera on December 1, 2022 during day hours at Debrigarh Wildlife Sanctuary near its entry gate in Bargarh district, a senior forest official said today.

The Big Cat (a population of the Panthera tigris tigris subspecies and called as Mahabala Bagha in local parlance) was spotted amid forest staff, safari vehicles and tourists when it was crossing the road.

“Since 2018, no tiger was spotted inside Debrigarh sanctuary. This tiger appears to be a male sub-adult in the dispersal stage. It might stay in Debrigarh sanctuary or may also search its territory in a nearby landscape. It is a huge task now to protect and monitor the Big Cat inside our domain and with utmost sincerity, we are on our job. We are working in tandem with local police and public representatives too and in case of any untoward situation immediately we will control it without doubt,” DFO of Hirakud Wildlife Division and Debrigarh Sanctuary Miss Anshu Pragyan Das asserted.

“On the evening of 1st December 2022 at around 5 pm the tiger was seen while entering the wildlife sanctuary through its entry point. It walked on a forest road for some time without any fear and disturbance, before entering the forest. It also gave a photographic pose to safari vehicles for around 5 to 10 minutes staring at the patrolling unit of sanctuary and safari vehicles about 100 meters away from them,” the senior forest official stated.

According to the official source, Debrigarh has a healthy herbivore density and it is a potential tiger habitat. Prey density is more than 30 per square kilometer in the sanctuary. Among suitable prey of tiger, the Sambar population is the highest and spotted deer, wild boar are quite healthy in density.

Sambar and spotted deer are usually found moving freely and alone these days across the Hirakud Dam reservoir side area of Debrigarh sanctuary may be because of the rutting season (relating to the period of the year during which particular male animals are sexually active).

“After the entry of the tiger, Debrigarh sanctuary authorities have geared up the Tiger Monitoring process. Patrolling units are on job in the periphery of Sanctuary and its nearby villages and intelligence activities have been intensified. Two Tiger Monitoring units have been formed, of which one is in service inside Sanctuary and another is at Hirakud Division of Sambalpur district. Twelve patrolling troops supported with patrolling app are moving inside the sanctuary day and night,” the official expressed.

“Any civilian seen inside the Sanctuary will be arrested as entry into it is a non-bailable offence. Mobiles and locations of all suspected poachers of Bargarh, Sambalpur and the nearby districts, poachers in villages around Debrigarh, livestock grazers, shopkeepers in the suspect list etc are under surveillance by the wildlife division. More than 100 camera traps are installed throughout the Sanctuary. Metal detectors are being used to scan the vulnerable zones,” the senior official added.

It is pertinent to mention, last year under Hirakud Wildlife Division, 400 families (more than 1,000 population) from four villages including Kurumkel, Rengali, Bhutuli and Lambipali were relocated from the Sanctuary to outside creating more than 500 hectares of inviolate space for movement and predation of Wildlife.

Development of grassland over 500 hectares is under progress now. Hence the Sanctuary is now completely free from biotic disturbance.

All VHF stations are too functional and all staff have walkie-talkies. The vast Hirakud reservoir is the lifeline of Debrigarh Sanctuary and the congregation of wildlife is more in the amphi-terrestrial zone/overlapping zone between Sanctuary and the reservoir.

Patrolling by boat is also done day and night in order to prevent entry from the waterside. Around 200 hectares of Ipomoea weed has also been cleared in this area facilitating the movement of prey base to the waterfront.