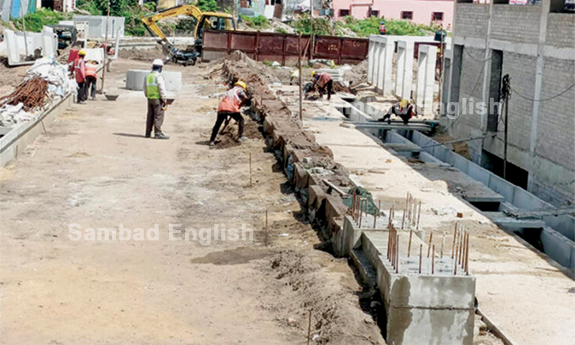 Puri: A gigantic concrete wall is being constructed these days around Jagannath temple in Puri, which is said to be second to Meghanada Pacheri of the Vaishnavite shrine, a source informed today.

Controversy still persists relating to certain earlier constructions that were underway without obtaining adequate permission from the National Monuments Authority (NMA), New Delhi. However, the fresh construction work has raised the eyebrows of many devotees and followers of Jagannath cult.

After its completion, the under-construction wall will be used for security purposes in future.

According to the source, due permission has not been obtained from the NMA in this regard and the issue has triggered strong resentment. Devotees and followers of the cult have started raising questions as to how and for what purpose the wall is being constructed under Srimandir Parikrama project.

After remaining silent for quite some days, the state Culture department had previously written a letter again to the NMA seeking the latter’s permission for 14 new constructions and two repair works.

“Width of the new wall is about one and half feet and it has several pillars at a distance of three to four feet each. Every pillar has at least 16 numbers of iron rods. Construction of the wall has almost been completed near Western Gate (Paschima Dwara) and was recently started near Northern Gate (Uttara Dwara),” a senior official in Odisha Bridge & Construction Corporation (OB&CC) Limited said.