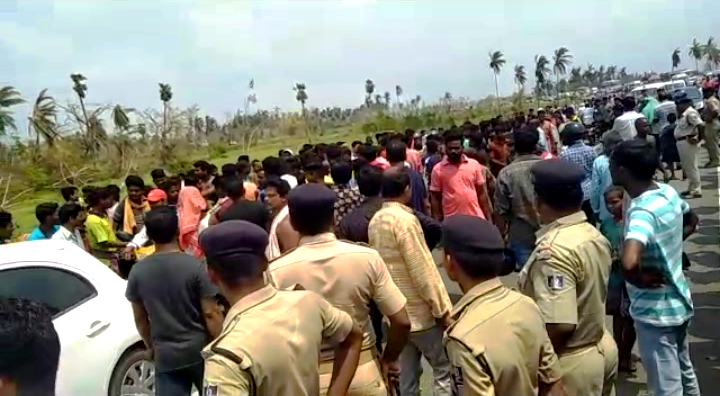 Puri: Vehicular traffic on national highway-16 between Bhubaneswar and Puri was disrupted today after irate locals affected by clone FANI locals blocked the road at separate places alleging irregularities in relief distribution and delay in restoration of power supply.

Alleging delay and irregularities in distribution of relief materials, several villagers blocked the road at Satasankha near Pipili today. Hundreds of vehicles were stranded on both sides of the road due to the blockade putting inconvenience for the passengers.

The villagers also alleged many affected families are not getting the relief materials properly. Reportedly, a vehicle carrying relief materials to Puri was stranded at Pipili toll gate due to the protest. Police personnel were deployed at the spot to pacify the angry locals till last reports came in.

“The administration has completely failed in managing relief and restoration works after the cyclone. Some irresponsible officers are providing rosy pictures to media without knowing the ground reality. I have contacted the control room several times since May 5 requesting for drinking water to our locality. Just the day before yesterday, though they provided water through pipe, it was not clean to be used as drinking water,” said Rashmi Biswal,a local.

Besides, residents of Hatasahi near Lingaraj temple blocked the Lingaraj temple-Jatni road by burning tyres and putting uprooted trees on the road protesting non-supply of electricity.