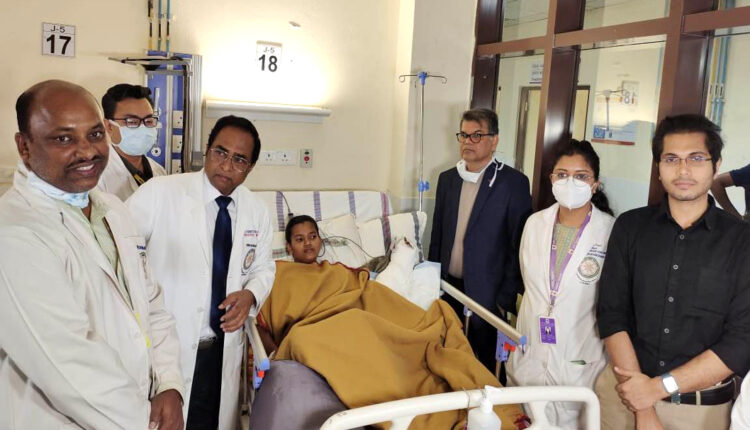 Bhubaneswar: A 25-year-old woman got back her forearm today after a successful hand reimplantation operation conducted at the All India Institute of Medical Sciences (AIIMS) in Bhubaneswar.

The patient Barsha Das from Krushnaprasad block of Puri district literally got a new lease of life because of some doctors of the AIIMS-Bhubaneswar. A team of doctors from the national institute successfully replanted the completely separated left forearm and the process took around 10 hours.

Barsha came to the emergency department of AIIMS-Bhubaneswar on December 9, 2022 at around 9 pm with a traumatic amputation of left forearm below her elbow. As per the history given by the patient, she was working at her home and her dupatta got stuck in the rice cutting machine along with her left hand at around 4 pm following which she was taken to a local government hospital along with the amputated hand where primary treatment was given, bleeding was secured and the dressing was done.

The amputated part was wrapped in a clean ganjee (vest) cloth and was kept in an ice bag by the person who attended her in the local hospital. The patient was immediately planned for reimplantation and was taken up for surgery on the same night at around 11.30 pm by the team led by Dr Sanjay Kumar Giri, Head of Burns and Plastic Surgery. The team comprised of Dr Santanu Suba, Dr Priyanka Pant, Dr Akanksha Rajpoot and Dr Vishnu from Plastic surgery department, Dr Nikhil and Dr Manjoy from the Orthopedics and Dr Jayant Mitra, Dr Hrushikesh and Dr Shailaja from Anesthesia department assisted by nursing officer Babulal and Jaswant Singh, a spokesperson of the institute expressed.

At first, the team of doctors took out the amputated part from the fridge and started bench dissection. All the vital structures were identified and tagged 3 cm bone were shortened. Then the patient was taken into the operating room and anesthesia was given. Amputated stumps opened and debridement was carried out and all the vital structures were isolated, the AIIMS spokesperson further said.

After that, the amputated forearm was attached to the body by first two bony fixations and then the arterial circulation was established along with vein, followed by two major nerves that were repaired along with muscles and skin, said the Burns and Plastic Surgery department Head Dr Giri.

“The surgery went up till 8 am in the morning and the patient was then shifted to ICU. After the tenth postoperative day, we took the patient to the operating room again as the skin around the elbow was not good. Under anesthesia, we removed all the devitalised skin and covered it with skin graft. Today, it is around two weeks following the incident. At present the limb is viable,” Dr Giri added.

Notably, executive director Dr Ashutosh Biswas visiting the young woman in the Ward earlier in the day applauded the efforts of AIIMS doctors for the rare feat. Dr Biswas also praised Barsha for her bravery and assured her of a prosperous future. Among others, medical superintendent Dr SN Mohanty, DDA in-charge Rashmi Ranjan Sethy also heaped praises on the team of doctors.