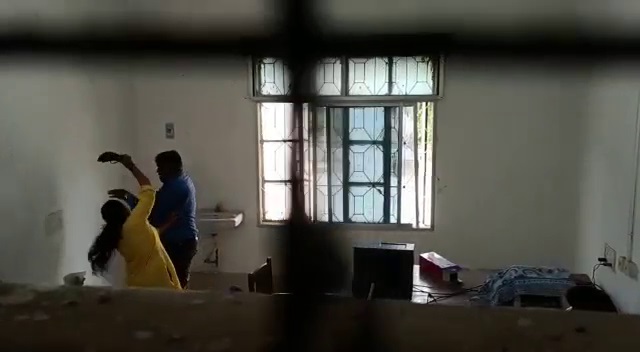 Berhampur: A video featuring a woman beating up an Assistant Professor of Berhampur University inside his chamber went viral on social media platforms.

The victim has been identified as Anil Kumar Tiriya, Assistant Professor of English Department at the Berhampur University.

Although the exact reason behind the scene is yet obscure, according to reports, the woman seen in video thrashing the Assistant Professor, was his wife.

The incident occurred at around 11.30 am on Saturday when Assistant Professor Tiriya was inside his chamber and his wife reportedly entered into the room unexpectedly and closed it from inside. She started shouting at him and beat him up with her shoe.

In the video shot from outside the chamber showed that the woman was abusing him verbally during assault.

Hearing noise from inside the chamber, the concerned staff of the varsity reached there and witnessed the entire episode. They knocked on the window asking the woman to open the door. When she did not pay heed to it, they called up the security personnel of the varsity to rescue the Assistant Professor.

Following requests by other professors and faculties, the woman opened the door after some time.

Sources said that the university staff were unaware about the fact that the woman, who was assaulting the Assistant Professor physically, was his spouse. Later, they managed to bring the situation under control after pacifying the couple.

Panel set up to select new VC for Berhampur University in…