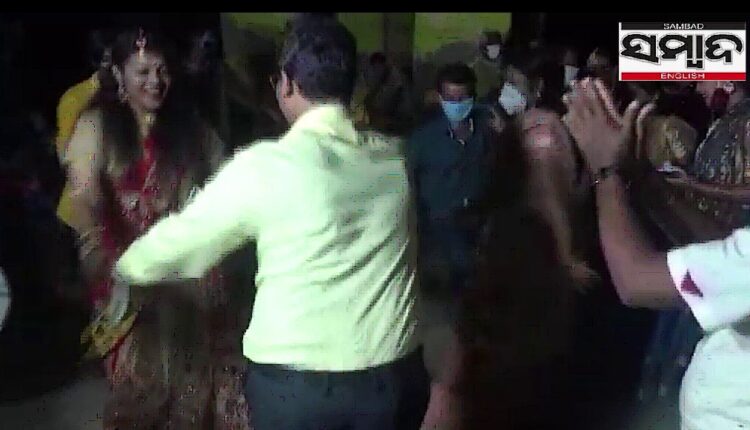 Jagatsinghpur: At a time when the Odisha government directed officials to enforce lockdown guidelines strictly to prevent spread of deadly Covid-19 disease, a woman bureaucrat violated the guidelines openly by dancing and participating in a marriage procession in Jagatsinghpur district.

A video which has gone viral on social media shows Sukinda Tahsildar Bulbul Behera was dancing during the marriage procession. Moreover, she was not wearing mask while dancing in the wedding procession. Social distancing norm was thrown to wind at the progarmme.

As per reports, the video was shot on May 21 evening during the marriage of Sukinda Tahsildar’s brother at Jagannathpur village under Tirtol block of Jagatsinghpur district.

While government officials have been imposing fine on people for not wearing mask, the dance of the Sukinda Tahsildar without mask on face at the marriage procession has raised many eyebrows.

As marriage feast has been not permitted in the State during the lockdown, officials and police have been seizing the food prepared for the occasion in different parts of the State. However, in this case the local police turned a blind eye even though villagers informed them about the matter.

Here’s how to use home testing COVID-19 kits