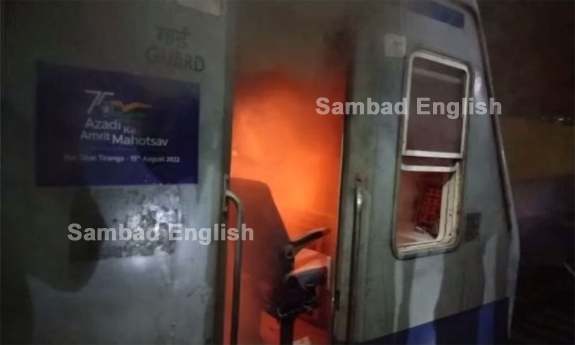 Jharsuguda: The engine of Gondia-Jharsuguda Passenger train caught fire at Brajrajnagar station today night. The inferno took place when the train was in a stationary position and the driver of the locomotive narrowly escaped.

The exact cause behind the blaze has not been ascertained yet.

According to official sources, the train coming from Gondia of Maharashtra had halted at Platform-3 in the railway station at around 8.00 pm when the fire broke out. However, the driver immediately got off the train and saved his life. A short circuit could be a reason behind the fire mishap.

On being informed, a team of fire services personnel reached the spot and strived for nearly an hour and doused the flames. Senior railway officials supervised the extinguishment work.

Further details of the incident are awaited.