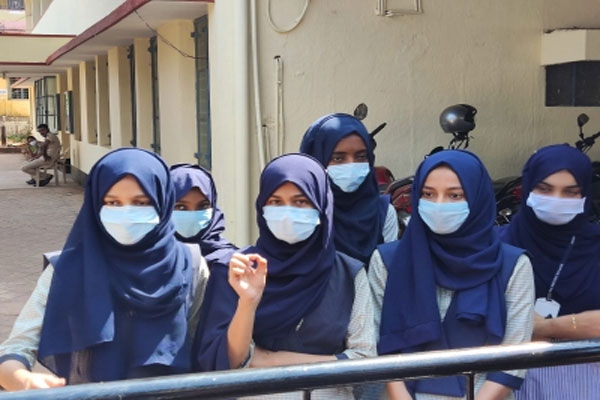 Bengaluru: Amid crisis related to wearing of hijab in classrooms, an Amritdhari (baptised) Sikh girl was asked to remove her turban in the reputed Mount Carmel PU College here in accordance with the February 10 High Court’s interim order. Some parents of the college also complained of being targeted after their daughters were asked to remove the hijab.

The authorities are now crossing their fingers over the turn of events on Thursday, as the sensitive issue could spread more and to other colleges as well in the state capital.

Though colleges across the state witnessed widespread agitations, protests regarding denial of permission to attend classes with hijab, the agitations so far had not touched Bengaluru in a major way. The Special bench of the High Court has made it clear on Wednesday that no religious symbols are allowed in the classrooms in PU as well as graduation colleges until the matter is disposed of.

Parents of college students who were asked to remove hijab by the authorities have demanded that the order of the High Court must be implemented equally to all students. The problem started when G. Sriram, deputy director of PU Education, who was inspecting the college during practical exams on Monday, directed two students to remove their hijab as per the court order. This led to outrage among the students and more students strongly protested against it.

Meanwhile, the college authorities of Mount Carmel PU College asked a Sikh girl student to remove her turban to follow the High Court order. The authorities also mailed about it to her father. The girl was asked to remove her turban on February 16, but she did not agree. However, after G. Sriram, deputy director of PU Education visited the college and asked students not to wear hijab, they demanded that others who were wearing religious symbols too should not be allowed.

The school authorities informed the father of the Sikh girl about the situation and her family informed the college that she would not take off her turban and they would seek a legal opinion on the issue. The education department maintains that the High Court interim order does not talk about turbans.