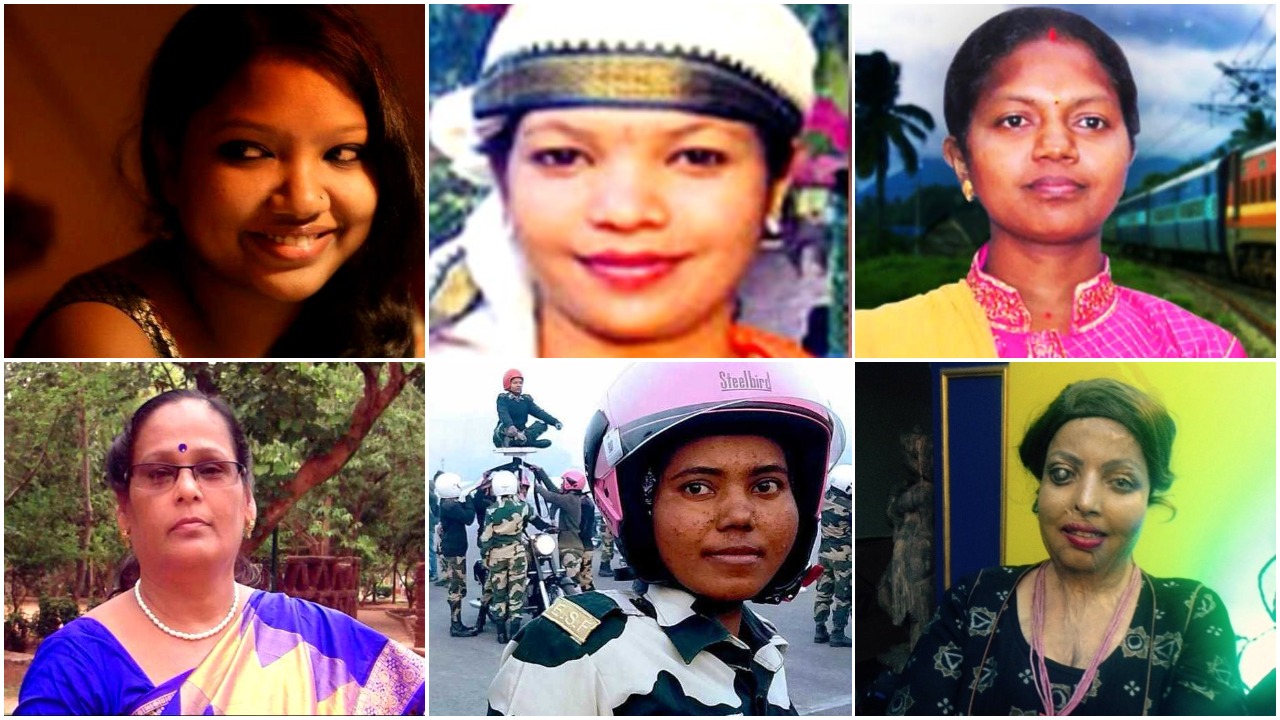 Bhubaneswar: Women in Odisha have been breaking the glass ceiling to set new milestones in a society that is patriarchal. On International Women’s Day, Odisha Sun Times salutes these achievers, who made inroads into the male bastion and fought hardships to emerge triumphant.

Six jawans from Odisha, Mita Hansda, Banita Das, Rasmita Das, Krishna Gartia, Anushaya Samal and Subanti, were part of the 27-member BSF women squad, Seema Bhavani or Border Bravehearts, which vroomed past Rajpath showcasing jaw-dropping stunts on 350cc Royal Enfield Bullets in New Delhi on Republic Day. The six made it to the women squad drawn from various combat ranks of the force. When the squad was put together, most women soldiers didn’t know how to cycle, let alone biking. After building basic fitness, the team was taught how to ride the hulky Bullets. The daredevilry acts they performed with aplomb, reminded the nation that its borders are safe with these badass women.  Odisha chief minister later felicitated these empowered women, who will continue to inspire many.

She stormed into the male bastion by forming the first-all-women Paika Akhada Dal in Odisha. It is no coincidence that this 23-year-old hails from Ratanpur village in Khurda that witnessed the Paika Bidroh against the British in 1817. With Karuvaki, a female warrior of Kalinga War, as her inspiration, Sunita started with lathi fighting and then tried her skills with a sword, which was worshiped at home. Under the able guidance Kedar Nath Das, she learnt martial art techniques at Janata College, Kuhudi, where she was pursuing intermediate. The Akhada, which she set up in 2012, imparts training to women and girls and prepares them to face adversities in life. Her team has also performed at national and state-level events, showcasing skills in martial arts, baton, sword fighting and military formations. She with her Kalinga Kanya has definitely set an example for others.

This tribal woman from Mayurbhanj already has four national awards in her kitty. Hers is an inspiring journey from Odia language primary school to country’s prestigious Film and Television Institute of India (FTII) in Pune. She  bagged the Best Director Award at the 64th National Film Award in the Best Educational Film category, for her documentary ‘The Waterfall’, last year.  The 20-minute film portraying a waterfall’s struggle for survival was screened in thousands of schools across the country and three countries. She had won the national award previously for her films ‘Gaarud’, ‘Eka Gachha Eka Mainsha Eka Samudra’, and ‘Kankee O Saapo’. She picks stories from her life and Odisha in all her films.  She is currently working on a feature-length documentary on the puppeteers of Odisha.

All she ever wanted to do is study. Seeing her interest, her father, a marginal farmer with seven children, got her enrolled in a residential school. After school, she slogged as a daily wage labourer earning Rs 15 a day and pedaling 35 km to work in a factory to make a few extra bucks to finance her education. The hardships continued as she completed Plus II and enrolled for skill development training at an ITI. She had to drop out initially having no money to pay the mess charges. Some relatives and good Samaritans stepped in and offered her help. After completing the course, she took up the job of a loco pilot, breaking the gender stereotypes and becoming the first woman from Odisha in this field.

No acid was strong enough to kill her spirit. This acid attack survivor has become an inspiration for all with her never-say-die attitude and the nation celebrated her engagement with Saroj Kumar Sahu, who stood by her through the most tumultuous period of her life, this Valentine’s Day. Pramodini was only 17 when a spurned admirer threw acid on her face, melting it away completely and blinding her in both eyes. From there began her struggle for survival as the incident left her paralysed. Life took a beautiful turn when Saroj entered her life, even as she fought the social stigma attached to the incident. Pramodini then moved to Delhi to work with Chhanv Foundation, supporting other victims of acid attacks. Last year, she was operated upon and can now again see the world with her left eye.

She may look ordinary, but not for the 26 children, whom she raised single-handedly as an SOS mother. These orphans became her life as she fought her parents and societal norms to give them parental care at the age of 33. It was a job which she took seriously for 25 years. Today, they are studying MCA, MBA, preparing for medical and helping each other to become independent. Speaking about her maa, Upasana, who is working as a media coordinator, said, “She took us under her protection and brought us up with great care. Never once did we feel abandoned or helpless.”