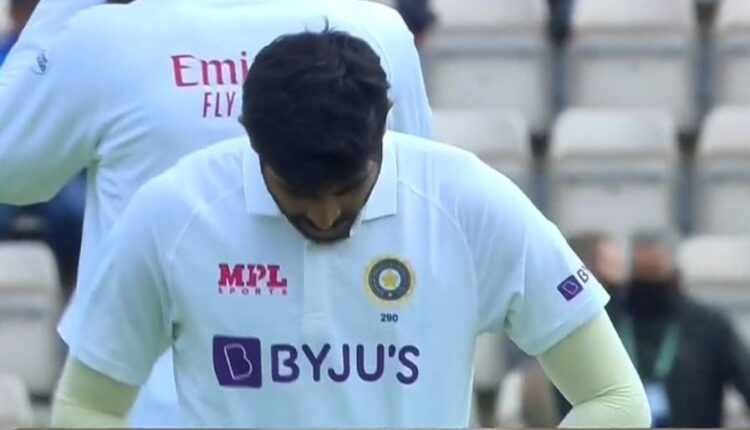 Southampton: India pace bowler Jasprit Bumrah was caught in a slightly awkward situation on the fifth day of the World Test Championship final at the Hampshire Bowl — when he opened the bowling against New Zealand wearing a wrong jersey.

The 27-year-old Bumrah, who went wicket-less and conceded 57 runs in New Zealand’s first innings on Tuesday, was seen wearing India’s regular Test jersey which had the main sponsor’s name printed in the centre.

Bumrah bowled the full first over of the day with the wrong jersey before rushing back to the dressing room to change it.

The International Cricket Council (ICC) rules stipulate that the country’s name should be mentioned at the centre of the jersey, while the sponsor’s name can be mentioned on the sleeves.

Powered by pacer Mohammed Shami’s four-wicket haul (4/76), India dismissed the Kiwis for 249 on the fifth day of the WTC final.

India went to stumps at 64/2 and will enter the reserve day on Wednesday with a lead of 32 over New Zealand.

Openers Shubman Gill (8) and Rohit Sharma (30) were both dismissed by pace bowler Tim Southee. Skipper Virat Kohli (8 off 12 balls) and Cheteshwar Pujara (12 off 55 balls) were unbeaten at the draw of stumps.

No Ratha Jatra in Odisha except Puri this yr: HC refuses to intervene in Govt decision