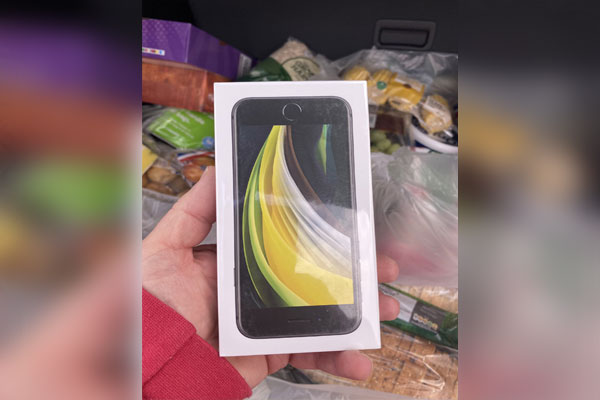 Bhubaneswar/London:  Have you ever been in a fruit market buying yourself ‘apples’ (the fruit) and dreaming about owning an ‘Apple’ (the iPhone)!

Online shopping has turned quite the safest way for shopping essentials since the COVID-19 pandemic broke. With online orders never resting, sometimes, a wrong delivery at the wrong door heats the air up between the customer and delivery service provider. But, how would you react if the wrong package at your door turns out to be something you always dreamt of having!

Well here’s one such tale of a happy accident.

Nick James, a resident of the United Kingdom, was thrilled on Wednesday to find out the delivery box he had collected had a brand new set of Apple iPhone SE instead of a bag of apples that he had actually ordered.

Excited, he took to Twitter and shared about his happy accident on the microblogging platform. With pictures of the new phone set, he wrote, “On Wednesday evening we went to pick up our click and collect order and had a little surprise in there – an Apple iPhone SE. Apparently, we ordered apples and randomly got an apple iPhone! Made my sons week!”

Nick also thanked service provider Tesco for presenting him the iPhone under its ‘super substitute’ scheme.

A big thanks this week to @Tesco & @tescomobile. On Wednesday evening we went to pick up our click and collect order and had a little surprise in there – an Apple iPhone SE. Apparently we ordered apples and randomly got an apple iphone! Made my sons week! 😁 #tesco #substitute pic.twitter.com/Mo8rZoAUwD

Apparently, Tesco, a multinational groceries and general merchandise retailer, was running a marketing campaign for its online customers. As per the campaign, it was giving away surprise gifts to its shoppers who ordered regular essentials.

Nick’s story received mixed reactions on the social media platform and tweeps filled his wall with compliments and queries.

Now if you are wondering when you would get this lucky, here’s a disappointing piece of information.

One of the tweeps on Nick’s wall asked Tesco if they made deliveries in India.  To this, the retailer company replied that they don’t deliver outside the UK.