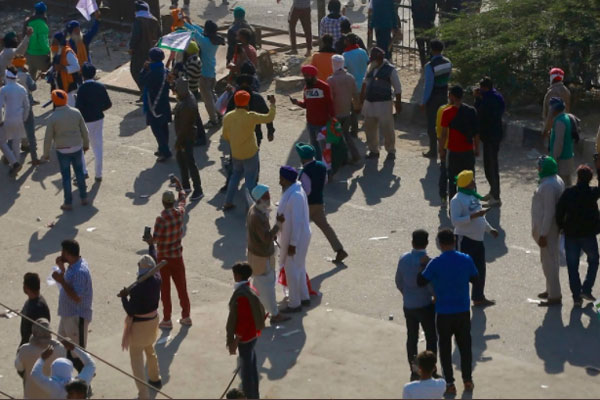 New Delhi: While the farmers are protesting against the three newly passed agricultural laws, a farmer from Odisha expressed his protest in a unique manner by shaving off his head and beard to mark his dissent over the new policies of the government.

Parthasarthy Jenna from Odisha tonsured his head at Delhi’s Singhu Border as a mark of protest. According to Indian traditions, shaving of the hair and beard is done when the head of the family dies.

Speaking to media, Jenna said, “The government has turned deaf to our voices. It seems like they are dead and hence, I am shaving my head and beard.”

He also added that he did so to send a strong message to the Centre and said that the protests would continue until the three laws are taken back.

Meanwhile, The farmer leaders sitting on a day long hunger strike while protesting against the three new agricultural laws ended their fast at 5 p.m.

The farmers leaders ended their fast after holding an “Ardaas” of Guru Nanak Dev.

The leaders also appealed to other farmer leaders across other borders like Ghazipur to end their day long hunger strike.

They also prayed for the welfare of the all (Sarbanth Bhala) and for the success of their motive by singing Gurbani.

The leaders sitting on hunger strike included Gurnam Singh Chironi from Haryana, Harinder Singh Lakhowal from Punjab and other leaders of more than 30 farmer unions under the banner of Sanyukt Kisan Morcha.