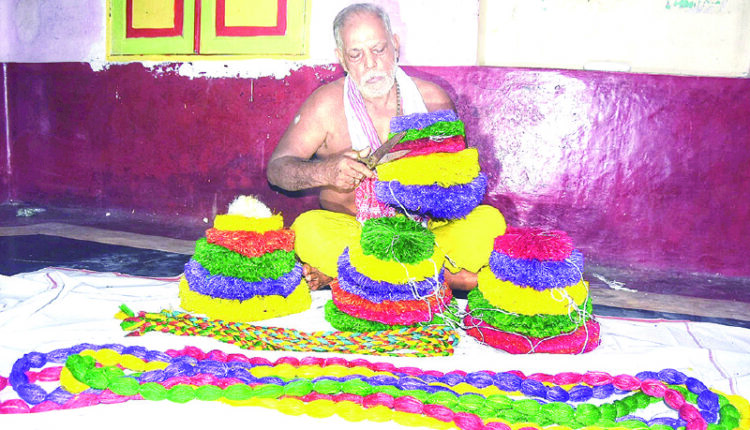 Puri: The Shree Jagannath Temple Administration (SJTA) is now making arrangements for the celebration of Gamha Purnima or Raksha Bandhan festival at the 12th century shrine.

As per the tradition, Devi Subhadra ties rakhi on Lord Jagannath and Lord Balabhadra as part of Gamha Purnima celebration at Srimandir.

The Patara Bisoyi servitors of Srimandir have already finished crafting rakhi for the deities, sources said.

The servitors usually craft four rakhis for the deities by using ‘Basunga Pata’, provided by the temple administration. They cut ‘Basunga Pata’ and sew them in concentric circles one atop another with the lowest disc being the largest.

The Patara Bisoyi servitors prepare a red and yellow coloured rakhi for Lord Jagannath and a blue and purple rakhi for his elder brother. They also craft areca nuts necklaces for the deities.

According to religious texts, Lord Balabhadra was born on the day of Gamha Purnima. So, the servitors perform some special rituals to mark the occasion.

“We usually start crafting the rakhi and areca nuts necklaces soon after the completion of Chitalagi Amabasya rituals at Srimandir. We finish our work at least two days ahead of the festival,” said Patara Bisoyi servitor Jagannath Patra.

No parade on Independence Day-2022 in Odisha