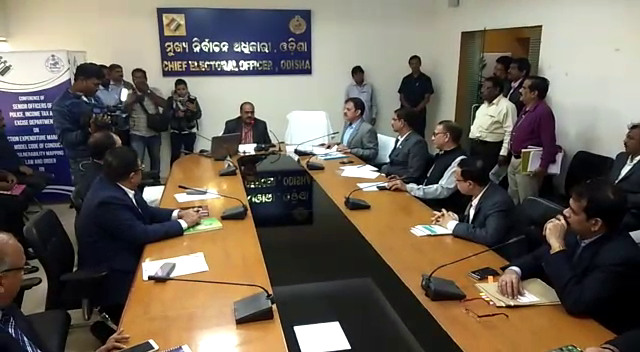 Bhubaneswar: To ensure a smooth conduct of Assembly and Lok Sabha elections in teh State in 2019, a preparatory meeting was held at the office of the Chief Electoral Officer (CEO) here today.

The meeting had discussion on several key aspects, including Standard Operating Procedure of Election Commission of India (ECI) and security arrangements for the elections.

Speaking to mediapersons after the meeting, Additional Chief Secretary of Home Department Asit Tripathy said, “Preparations for the simultaneous elections 2019 have already started. An orientation programme for police officers was held today. A director has been deputed by the ECI to deliberate on two-three modules,”

Discussions on how to ensure a free and fair election and maintain law and order situation were also held during the meeting. The discussions were held under the general superintendence of ECI as per the Constitution, he added.

Among others, DGP RP Sharma and Crime Branch ADG Santosh Upadhyay were present  at the meeting among other officials.