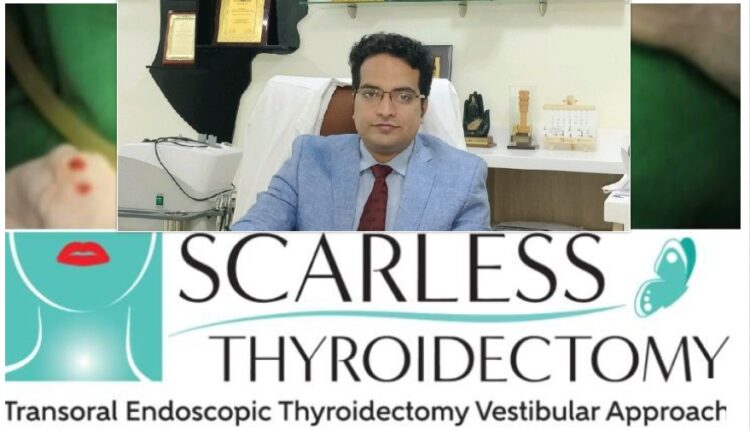 Thyroid disease largely  affects  young females, but the cases are also increasing among males. In an effort to avoid the scarring of the neck that is synonymous with conventional thyroidectomy, endoscopic techniques have been developed over the years. The transoral endoscopic approach is the latest of these innovations that promises a scarless surgical  outcome.

Traditionally, surgeons removed the thyroid gland by making a horizontal incision in the centre of the neck and  the expanse of the scar depended on the size of the gland, the average being 4 to 6 cm long. The other endoscopic extra cervical approaches involved a scar  and required a very long route to reach the thyroid gland.

Recently, there has been increased interest in applying the principles of minimally invasive surgery to thyroid surgery. This was initially developed in 1999  and has  continued to expand and improve throughout recent years. The aims of minimally invasive surgery include better cosmetic and earlier recovery without compromising the excellent results achieved with open surgery.

The present method, known as Trans Oral Endoscopic Thyroidectomy   (TET), is the only true scar less procedure based on the principle of Natural Orifice Transluminal Surgery (NOTES). It gives direct access to the thyroid gland and covers a minimum distance to reach the thyroid with least complication rate.

In this procedure, three  ports of 1 cm and 0.5 cm size are made on the inside of the lower lip through which the surgeon  is able to place endoscopic instruments between the jaw and skin to  open up the working space needed to remove  the gland, which is a short distance from the incision site. The two-hour long procedure is conducted under general anesthesia. TET is a feasible procedure, which could be the final frontier in endoscopic thyroid surgery.

Odisha’s Aska Police Station felicitated as the best in India